Burial, prayers and a miracle on 11th day after quake 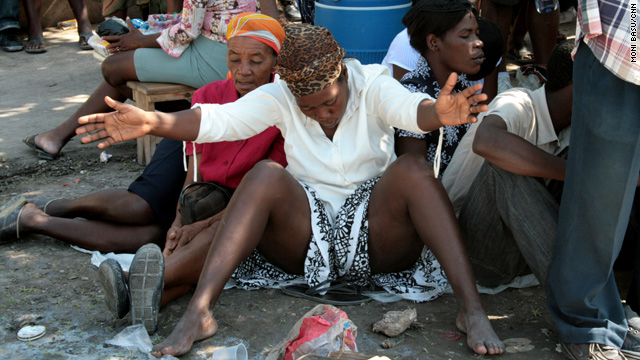 Port-au-Prince, Haiti (CNN) -- A nation of desperate and grieving people showed the fervency of their faith Saturday in this earthquake-ravaged capital.

They mourned an archbishop, prayed in an open-air revival and, later in the day, witnessed a miracle.

In a somber ceremony, Haitians turned out for a funeral Mass for the archbishop of Port-au-Prince, whose body had been recovered from rubble near the landmark national cathedral. They buried Monsignor Joseph Serge Miot at Lilavois Cemetery.

Not far away, in a central city refugee camp, Marielourde Meridier hoisted her arms skyward, shook her head from side to side and shouted out the word "Grace!"

Beside her, daughter Lovencia, 6, washed her dust-caked and scarred feet, her little head bandaged tightly to heal wounds from the crashing concrete.

Meridier was thankful. Of her five children, only one was hurt badly enough to go to a hospital. Now, she relied on her faith to get her through.

In the Champs de Mars plaza, which has become a makeshift settlement for earthquake victims, Haitians gathered for what they called a day of redemption.

Pastor Gregory Toussaint of the Tabernacle of Glory Church in Miami, Florida, who helped organize the event, said that those who suffered when the Earth shook wanted to ask for God's forgiveness.

From 6 in the morning to 6 at night, they prayed.

Some blamed themselves for drawing the ire of God. Others came to openly give thanks. Thousands together.

The stench of human waste mingled with fumes from hot grease. Women fried fish patties and sausage while a long line formed for people to get up on stage with the pastor.

The Earth's convulsions rendered hundreds of thousands of Haitians homeless. Many settled in more than 200 open spaces around the capital.

These camps are known as tent cities, but that's a generous description. Only a few -- the lucky ones -- possess a tent or plywood or plastic sheeting. Many endure the stinging tropical sun all day long.

Near the Champs de Mars plaza, Port-au-Prince's national cathedral lay in ruin, its architectural grandeur reduced to a heap of mangled concrete and metal and shattered stained glass. Other churches, too, were silenced by nature, but parishioners have hardly gone quiet.

The sound of song and "amens" filled the square.

Junior Rosier said the people around him differed on why the quake crushed them.

"You know, many of these people blame themselves for what happened," he said. "We all have our opinions. But prayer is a great thing. Because we survived."

Rosier lost his elder brother Fednel when his home was destroyed. He has been living in the Champs de Mars tent city since the 7.0-magnitude quake leveled this city.

He had been teaching at Bright English School that wretched day; many of his students did not make it out alive.

Across the street from the plaza, a long line snaked along a footpath. It was the first day since the quake that banks opened for business in this city. With wallets as empty as their bellies, some people arrived as early as 5 a.m. to make sure they would be able to get through the door.

Berette Rodolph was not so sure. He still had half a block to go near closing time.

"They said they are closing at 3," he said. Sweat and desperation covered his face. "I have zero. They must let me in."

His voice was drowned out by the prayers in the plaza. At the sound, a smile bloomed on his face.

Then, within hours, a miracle materialized elsewhere. A 24-year-old man was pulled from the rubble of Hotel Napoli Inn. Buried for 11 days, he was alive.

The chief of the rescue team pointed upward and said three words.