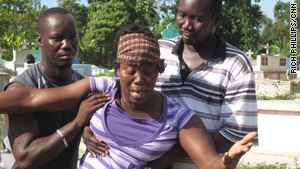 Beatrice Elan mourns the loss of her daughter, who had been pulled from the rubble alive.

Liancourt, Haiti (CNN) -- She gingerly walked from the car and shuffled up the small hill, her eyes welled in tears.

The first sight of her daughter's grave was too much for Beatrice Elan to bear. She began to scream and flail.

On Thursday, Elan's 11-year-old daughter, Anaika St. Louis, became another victim of a tragedy unforgiving to both the old and the young.

For 48 hours she had lain trapped under the rubble since a 7.0-magnitude earthquake struck Haiti on Tuesday.

Her right leg was crushed and pinned by a steel beam.

Video: Profile of a quake victim

"My lord God, save me!" she cried. Her screams were chilling.

Share your tributes to victims of the Haiti earthquake

No rescue teams could be found. Caring neighbors and family desperately tried to cut through steel using a hacksaw.

CNN correspondent Ivan Watson and photojournalist Dominic Swann, climbed up into the crevice that trapped Anaika, and brought her water and granola bars.

She reached out to hold their hands when she was scared.

Volunteers gave Anaika a pair of glasses to protect her eyes from the dirt.

"She spent 3 days in the hole. All that time saying, 'My God, I don't want to die. I want to live," said her aunt Etiana Jean-Baptiste.

On Thursday night, neighbors found a power saw and a portable generator. Soon after, Anaika was free.

But a happy ending eluded this story.

Anaika was rushed to a doctor, who could only offer some mild pain killers.

The doctor told the family that they had to get Anaika to a hospital about three hours away.

Her uncle said Anaika was bleeding internally. She was so incredibly strong, he said, and was willing to have her leg amputated, to live.

"She say, 'Thank you, God. Because He save my life," said Rodreffe Jean-Baptiste, in broken English.

"If I lose my feet. I always had my life," he recalled his niece saying.

But before the night was over, Anaika was gone.

Anaika's family called her the "little lawyer," because she wanted to study law one day.

She sang in the choir at church and at school, and seemed to have found a special place in each of her family members' heart.

Her aunt said she was just beautiful.

"She spent all her time reading the psalm. She said, 'My God, come help me.'"

Anaika's funeral was held in a church in Liancourt on Friday night and Anaika was buried -- wearing a Girl Scouts uniform and a veil in Liancourt.

Liancourt, about two hours away from the devastated capital of Port-au-Prince, escaped the quake's fury.

This is where Anaika's family has taken refuge -- and where they mourn the passing of a little girl with an angel's voice.