Where her son made music, anguished mother listens for life 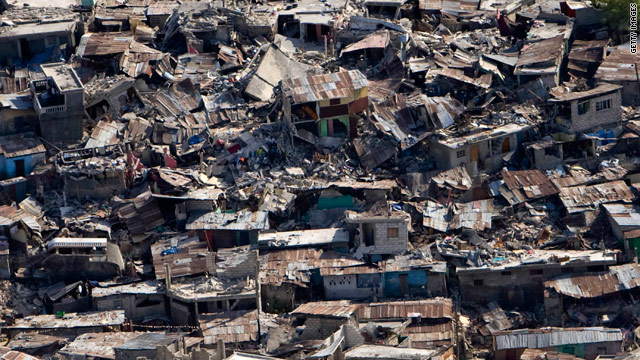 Stories, like Jean Baptiste Vanise's search, are coming out of Haiti of mothers and fathers in a desperate hunt for their children.
STORY HIGHLIGHTS

Port-au-Prince, Haiti (CNN) -- Jean Baptiste Vanise suffers the anguish no mother should have to bear.

She received a text message from her 12-year-old son Tuesday afternoon asking, "Where are you?"

Her only child, Marc Valends Louis Charles, played the violin at Holy Trinity School and Craft Center in Haiti. That's where she believes he was when Tuesday's 7.0-magnitude earthquake flattened large parts of Port-au-Prince and turned this mother's life upside down.

She returned to the school Thursday, just as she did Wednesday and Tuesday.

The music classroom where she believes her son remains entombed sits in a corner of the teal building with its open courtyard.

Video: Obama:'Haiti must be a top priority'

Video: Rescued from the rubble

She has heard from someone at the school that Marc Valends was not there when the temblor hit; that he was with another child or that one of the teachers dropped him off somewhere.

As much as she might want to, she does not believe that's the case. So she returns to the school.

A Holy Trinity official will not let her near the classroom because an overhanging roof could fall. Aftershocks continue to be felt, with strong jolts waking people in the early morning hours Thursday.

Still, several young men are digging through the rubble.

Armand St. Louis, 30, says his 8-year-old cousin and a 19-year-old girl are still trapped. He has talked with them, St. Louis said.

He is digging his way down from the computer room, which collapsed onto the music room.

But he is determined to get to young Clautide Nelom.

"I'm about to go back in there," he said. "I'm doing my best. There are other people in there. We're getting no help to get them out.

Vanise, the anguished mother, asks for quiet so she can call out to her son although she's a good 30 yards away.

"Louis Charles," she shouts a couple of times.

"Marc Valends," she then shouts a few times.

Nothing. Silence. She breaks into sobs.

The bereaved mother does not know what to do, where to go next. She has looked for him everywhere, she says.

"This is the only place he could be," Vanise says, walking away.