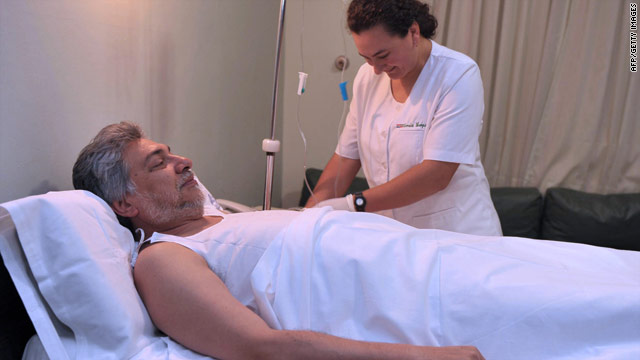 The surgery, which was performed at the Italian Hospital in Asuncion, had been scheduled for weeks, spokesman Augusto dos Santos told reporters.

The procedure was performed under local anesthesia, the spokesman said.

Lugo's doctor, Nestor Martinez, said the operation was a transurethral resection, a surgery in which an instrument is inserted into the urethra to remove a section of the prostate that is blocking urine flow.

Enlarged prostates are common among men as they get older. Lugo is 58.

The surgery involved nine doctors and three nurses and took about an hour, Martinez said at a news conference. Lugo arrived at the hospital at 4 a.m. ( 2 a.m. ET), was wheeled into surgery at 5 a.m. and was in the recovery room by 6 a.m., Martinez said.

The Paraguayan president's office released post-surgery photos of an alert-looking Lugo chatting with doctors and nurses while lying in a hospital bed.

Lugo is a former Roman Catholic bishop who has been involved in several paternity controversies in the past year.

He is expected to remain in the hospital until Saturday afternoon and then recuperate for three to four days in the presidential residence, spokesman dos Santos said.

Lugo will carry on a restricted agenda while recuperating, the spokesman said