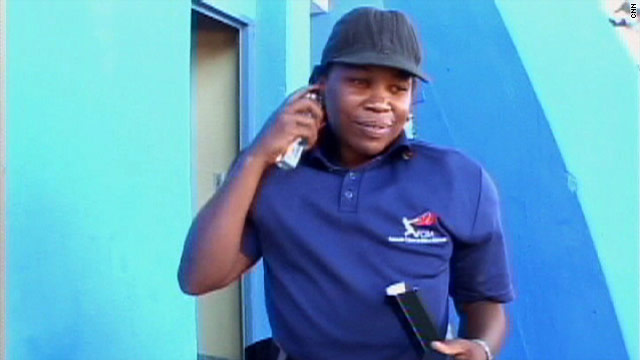 Havana, Cuba (CNN) -- On a field dominated by men, Yanet Moreno is the only woman to step onto the baseball diamond during Cuba's national championship.

As the only female umpire to call in the National Series -- Cuba's equivalent of the big leagues -- Moreno, 35, has set a historic precedent.

You can spot her behind the plate, often hidden under layers of padding, with a baseball cap pulled down low on her head.

"I was born liking baseball," she said in a recent interview with CNN.

But as a child, she struggled to hold on to her love for the game without striking out with her family.

"I played baseball with the kids in the street. My father punished me because he said it was for boys. So I played secretly."

Moreno went on to play center field on Havana's women's youth softball team for 13 years. And she briefly joined one of Cuba's newly formed women's baseball teams before they imposed an age limit of 25.

Moreno was encouraged to train as a professional umpire, and before she had even finished school she was called to the National Series. She refereed her first game in December 2006, right at the start of the four-month baseball season.

Like umpires everywhere, Moreno says she has trained to keep a cool head while under pressure from players in a heated competition.

"With me, they can't fool around -- on or off the field," she said. "I try to always maintain a distance between player and umpire."

With Moreno on the field, angry fans have found creative ways to vent their frustration with her calls.

A faithful follower of Havana's top team, Industriales, said fans have to show a little respect -- Moreno is a woman, after all.

"When she makes a bad call, the insults we shout are mild," the Industriales enthusiast said. "'Are you blind? Can't you see? Bring some glasses!' It's not like that with men."

Others try to throw her off guard with a little flirtation.

"We compliment her," another Industriales fan said. "'You're so beautiful. You have such a nice body.'"

But when it gets down to the wire during those final games, almost all eyes are glued to the players themselves -- not the umpire.

Internationally, there's little tradition of women working in professional baseball. In 2007, Ria Cortesio became the first woman since 1989 to work a major league exhibition game in the United States.

We have to keep painting our nails, fixing our hair, plucking our eyebrows, never stop being women.
--Yanet Moreno
RELATED TOPICS

Moreno's experience has inspired other women to enroll in Cuba's national school for umpires, but none have made it to the National Series.

Still, she has advice for women trying to succeed in a man's world: "Those of us who work with men, should never stop being feminine," she says.

"We have to keep painting our nails, fixing our hair, plucking our eyebrows, never stop being women."

True to her word, at a recent game, Moreno sported bright red fingernails and a neatly coiffed hairdo. Before each game, she sprays herself with perfume.

"It's a tradition of mine," she said as she geared up. "So when I sweat, I smell like perfume."

Moreno might play in the dirt with the boys, but she relishes her femininity.