Obama to get update on terror plot inquiry 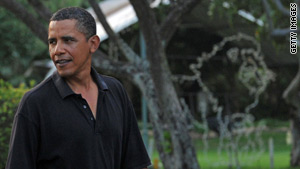 Washington (CNN) -- President Barack Obama will meet with his top security officials Tuesday to get an update on the inquiry into security lapses that allowed a bombing suspect to board a U.S.-bound flight.

After the meeting, Obama will make public statements about his findings and an initial series of reforms to improve the country's ability to thwart future attempts to carry out terrorist attacks, according to the official.

The president met with Deputy National Security Adviser John Brennan for 90 minutes on Monday and is scheduled to meet with him again Tuesday, the official said.

Brennan will give Obama an update on his review of the terror watch listing system.

According to authorities, a Nigerian man tried to detonate explosives hidden in his underwear as a flight from Amsterdam, Netherlands, made its final approach to Detroit Christmas Day. The device failed to fully detonate, instead setting off a fire at the man's seat.

The bombing suspect -- 23-year-old Umar Farouk AbdulMutallab -- was arrested on charges of attempting to destroy an aircraft. He will face his first court hearings on Friday.

Last week, Obama blamed human error and security lapses for the failure by U.S. officials to act on information that the Nigerian bombing suspect was a possible terrorist threat.