Group seeks answers to Haiti's woes in its toilets 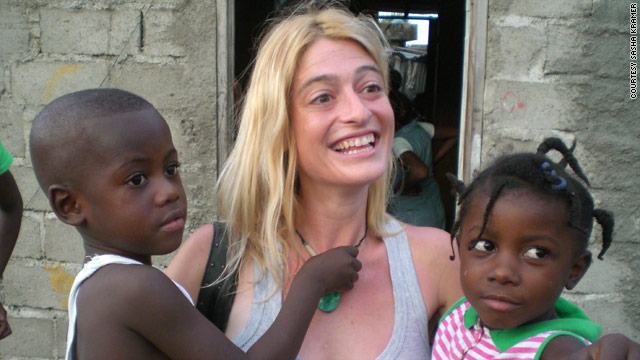 Sasha Kramer was a human rights observer and ecologist when she helped found SOIL.
STORY HIGHLIGHTS

(CNN) -- It's not often you get away with staking out an ex-president to give him a bag of your, ahem, personal waste.

Generally, the Secret Service would get involved.

But Sasha Kramer and Sarah Brownell's pursuit of Bill Clinton in Milot, Haiti, in October serves as testament to the young women's moxie. Their organization aims to improve agriculture and sanitation in Haiti via "composting toilets," and it couldn't hurt if the former president took notice, they thought.

"I waited by the palace gates, and Sarah went to the soccer field where it was rumored the helicopter would land," Kramer said, explaining that Brownell saw Paul Farmer, Clinton's deputy U.N. special envoy to Haiti, and gave him a bag filled with "beautiful compost from our household sanitation/composting system."

"Sarah asked Paul to pass it on to [Clinton] and mentioned that we had 'contributed' to it," Kramer said.

Kramer, 33, and Brownell, 34, founders of Sustainable Organic Integrated Livelihoods, are not shy about discussing bodily functions. They can't afford to be squeamish when their plan to improve Haitian life relies so heavily on the comings and goings of human digestion.

Haiti is the most impoverished nation in the western hemisphere. Plagued with "political violence for most of its history," according to the CIA, the Caribbean island nation has suffered from colonialism, coups and corruption since becoming the first black republic in 1804.

More than half of the country lives in "abject poverty." The nation imports more than four times the goods it exports and about two-thirds of the labor force lacks "formal jobs," the CIA reports.

SOIL's founders are not dissuaded by the figures because they believe many ills in the nation of 9 million can be traced to public sanitation and the dirt's lack of nutrients.

Disease is rampant, and it's still common for children to die from fecal contamination in the water. UNICEF estimates that 70 percent of Haitians do not have access to "safe drinking water and adequate sanitation."

Meanwhile, the International Conference on Reforestation and Environmental Regeneration of Haiti states the nation once enjoyed 60 percent forest cover but now possesses less than 1 percent of its trees.

"With the forest cover gone, floods ravage the country at each rainfall. Topsoil washes into the sea. And since the only hope of Haitians for feeding their families is the soil and small-scale farming, it is a terrible humanitarian disaster," the conference wrote in 2007. 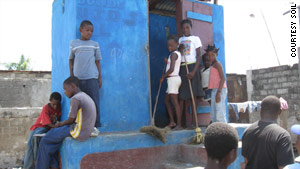 Members of Youth for the Development of Shada clean a toilet built in their community. 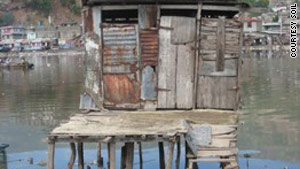 Bos Tony of Shada says people used the bathroom over an estuary before SOIL had a toilet built.

The solutions are as interconnected as the problems in Kramer's and Brownell's minds. The ecologist and the engineer have arranged the construction of scores of special toilets in villages across northern Haiti.

"You get the poop out of the water and get it into the food again," Kramer explained.

Granted, it sounds gross, but Kramer and Brownell operate their own "dry toilet" at their home in Cap-Haitien. The fertilizer for their personal garden comes from the composting pit on their roof -- the same pit that produced the sample for Clinton.

There are variations on the toilets, but the general idea is to separate the liquid and solid wastes. The "liquid gold" is diluted and used on fruit trees, Kramer said.

Handfuls of sugarcane bagasse are added to the solid waste to expedite the composting process and to ward off flies and odors. The solid waste is stored until it can be collected (some toilets store up to 600 gallons) and transported to a composting site where it will sit for a year until it's free of organisms. Kramer said SOIL hopes to sell its first load of fertilizer within weeks.

Education is important as well, Kramer said, noting that when she asks Haitian farmers what they use as fertilizer, they reply, "God waters our gardens with rain, and that's all we've got for fertilizer."

SOIL also has to convince villagers to tear down unsanitary toilets. Such was the case recently in Shada, where villagers had constructed toilets over an estuary.

Brownell, who has an environmental engineering master's from the University of California-Berkeley, first went to Haiti in 1998 to install solar panels at a health clinic in Le Borgne. The panels didn't arrive for two months.

"I was hanging around with not really any project to do, and I really felt like the community took me in, took care of me, even though I didn't really have much to offer them at that point," Brownell said.

She studied Creole and practiced crocheting, cooking and washing clothes by hand. The Haitians made fun of her ineptitude at the latter task, Brownell said, so she spent time "trying to perfect my skills" as her instructor's 2-year-old son, Jeffrey, toddled around the washbasin.

Brownell eventually finished the solar panel project and returned to school at the Rochester Institute of Technology in New York. When she went back to Haiti two years later, she learned that Jeffrey had died of diarrhea and dehydration -- a death Brownell calls "totally preventable" if Jeffrey had simply had access to clean water and a safe place to use the bathroom.

...the most prevalent human rights abuse is really poverty and the fact that people didn't have access to their basic needs.
--Sasha Kramer, SOIL co-founder
RELATED TOPICS

"This was something that really touched my heart as a way for me to use engineering to make that connection with the social aspect of helping people to live their lives better," Brownell said.

Kramer, who studied "nitrogen cycles" while earning her doctorate at Stanford University, is a human rights observer first drawn to Haiti's political movements. She met Brownell at a Mexican restaurant in Berkeley in 2005 and quickly found common threads in their interests.

"Even with the all of these acute human rights violations that were happening in Haiti at the time," explained Kramer, "the most prevalent human rights abuse is really poverty and the fact that people didn't have access to their basic needs like food, sanitation and water."

They founded SOIL in 2006 and wrote the bylaws while driving from upstate New York, from where they both hail, to Miami, Florida, in a truck donated to SOIL by Kramer's parents.

Toilets are one example of SOIL's outreach. The group also holds contests urging children to recycle garbage into something useful and Brownell's husband, Kevin Foos, spearheads a photo empowerment project called "Looking Through Their Eyes," which allows children to capture what they love and hate about their communities on film.

Watch how the children were recognized at a recent festival

SOIL also supports special centers in Shada, Milot and Le Borgne where Haitians can present and test technologies for improving their health, environment and economic independence.

Villagers warmly welcome Kramer and Brownell, and SOIL's efforts have caught the attention of Haitian musicians BélO and Rosemond Jolissaint. The founders hope to draw more attention to their endeavors because budget woes are a frequent concern -- hence their pursuit of Clinton.

Kramer said she doesn't know if Clinton's deputy delivered SOIL's gift, but given her weighty ambitions, her optimism is not surprising.

"We chased the delegation on motorcycle from the palace to the soccer field," she said. "Rumor has it that someone saw [Clinton] getting off the helicopter in Labadi with the bag over his arm."