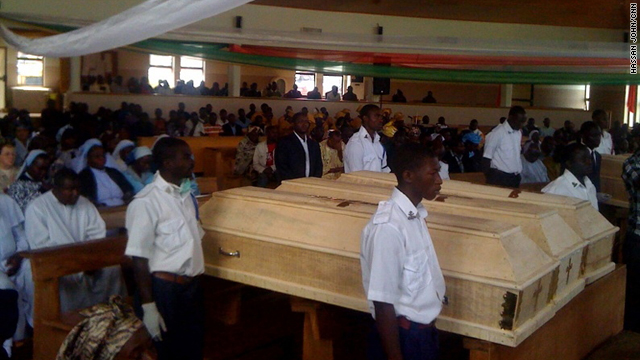 A mass burial service is held Friday for the victims of the bomb blast in Jos, Nigeria, on Christmas Eve.
STORY HIGHLIGHTS
RELATED TOPICS

Jos, Nigeria (CNN) -- Nigerian authorities on Friday arrested 92 people allegedly affiliated with a militant Islamist group that the government says is responsible for a string of recent killings in the country's northeast.

Police blame the group, Boko Haram, for attacks Wednesday that left three police officers and one civilian dead in Maiduguru and for Christmas Eve attacks on two Christian churches in the city that left five dead.

Borno state Police Commissioner Mohammed Abubakar said those arrested were "members of a dangerous religious fundamentalist group... (that) is anti-government."

Maiduguru is the capital of Nigeria's Borno state.

According to IHS Jane's, a defense and security analysis company, Boko Haram is a Sunni militant group that emerged in 2003 and is fighting for the implementation of strict Islamic law in Nigeria.

Nigeria has been rocked by recent religious violence, with the government blaming it most of the recent attacks on Islamist extremists.

Christmas Eve attacks in the volatile city of Jos claimed at least 31 lives, but the Nigerian government has said it is unclear who is responsible. On Friday, there was a mass burial for 16 of the victims.

"The perpetrators of this act are criminals under the guise of religion," said Benjamin Kwashi, the Anglican archbishop of Jos, at a memorial service.

Three men were arrested with bombs in their possession in the vicinity of Jos on Christmas Day, authorities said

The Jos region lies on a faith-based fault line between Muslim-dominated northern Nigeria and the mainly Christian south.

At least four people were killed and another 13 wounded Friday in a bomb blast at an army barracks in Abuja, the deputy police commissioner said.

Read more about the attack