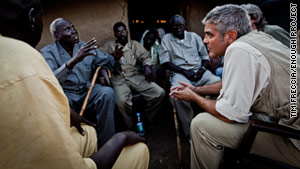 Actor George Clooney has focused on Darfur through his organization Not On Our Watch.
STORY HIGHLIGHTS
RELATED TOPICS

(CNN) -- A satellite surveillance project spearheaded by actor George Clooney's organization will monitor violence in Sudan during a January vote that could split the country in two.

The program will use satellite images to assess the situation on the ground for any signs of conflict, monitor hotspots in real time and post the findings online, organizers said. The satellites can help capture threats to civilians, keep track of displaced people and inspect razed villages, the organizers said in a statement.

"We want to cast a spotlight -- literally -- on the hotspots along the border to record any actions that might escalate the chances of conflict," the statement said. "We hope that if many eyes are on the potential spoilers, we can all help detect, deter and interdict actions that could lead to a return to deadly violence."

Clooney said in the statement the program will help avert crime.

"We want to let potential perpetrators of genocide and other war crimes know that we're watching, the world is watching," he said. "War criminals thrive in the dark. It's a lot harder to commit mass atrocities in the glare of the media spotlight."

Humanitarian agencies hope the alert system will prevent human rights violations in a country where attacks in the western Darfur region have killed hundreds of thousands in the past seven years.

Not On Our Watch, an organization co-founded by Clooney that focuses on Darfur, is funding the satellite effort. It is collaborating with other groups, including the United Nations, Google and the Harvard Humanitarian Initiative, organizers said.

The January referendum, which will determine whether southern Sudan will become an independent state, has sparked fears of renewed violence.

The vote is part of a 2005 peace agreement that ended two decades of violence between the north and oil-rich south. The conflict led to the deaths of 2 million people, many from starvation.

The United Nations' Operational Satellite Applications Programme -- which is part of the effort -- said it is ensuring its "capabilities for satellite analysis and geographic information" are utilized to avoid another humanitarian crisis.