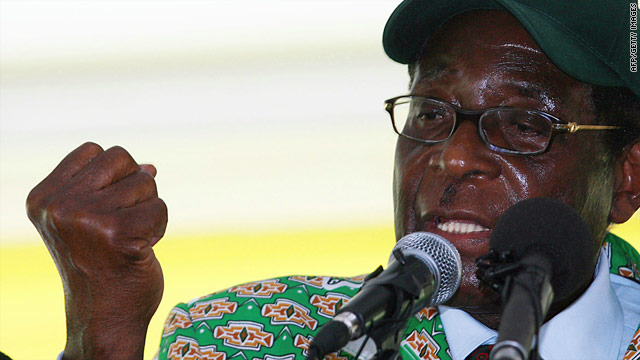 Mutare, Zimbabwe (CNN) -- Zimbabwean President Robert Mugabe threatened Friday to seize all Western-owned investments in the country unless their governments remove targeted sanctions imposed on him and his senior ZANU-PF party members.

The 86-year-old former guerrilla leader spoke at his party conference in Murare.

"This conference must come with a real program, a solid program of how we decide to fight sanctions," Mugabe said. "What is our anti-sanctions program? We have been too far too good for malicious people for countries which seek to destroy us. Why should we continue to have 400 British companies here operating freely with Britain benefiting from us?"

The 86-year-old former guerrilla leader said that "the time has come for ... revenge" and suggested that Zimbabwe's Indigenization and Economic Empowerment Act -- which gives foreign companies five years to submit plans for transferring 51% of their investments to black Zimbabweans -- did not go far enough.

"We can start with that 51%. In some cases, we must read the riot act to the British and others and say them, 'This is only 51% we have taken. Unless you remove sanctions, we will go 100%,' if they insist the sanctions must remain," he said.

In 2002, the European Union and the United States imposed targeted sanctions on Mugabe and some senior party members after rampant reports of human rights violations and stifling of the opposition. Mugabe blames the sanctions for his country's woes, which include an unemployment rate of more than 90% and an inflation rate of 231,000,000%.

Zimbabwe's Indigenization and Economic Empowerment Act was passed by a ZANU-PF-controlled parliament and put into effect this year. It has been the subject of considerable criticism, particularly from opposition leader and Prime Minister Morgan Tsvangirai's Movement for Democratic Change.

Mugabe has held power since Zimbabwe became independent in 1980. A 2008 election resulted in a runoff between Mugabe and Tsvangirai. Movement for Democratic Change, charging fraud in the election, eventually pulled out, and Mugabe was declared the winner.

In 2009, with ZANU-PF no longer a majority in the parliament, Mugabe formed a coalition government with Tsvangirai, who was named prime minister.

On Friday, Mugabe said he was tired of working with the opposition party, which he said "lacked ideology and policies." He termed the unity government a "creature."

Mugabe warned Western diplomats not to interfere in Zimbabwe's elections, which he said would be held next year. He said the West had contributed to his party's defeat in 2008.

"(In 2008), we had even the American ambassador going out with anti-ZANU-PF documents and blatantly organizing for MDC," he said. "That will not happen (next year). Any ambassador who does will kick him out. We have been too good."