By Aliza I. Kassim and Lillian Leposo, CNN 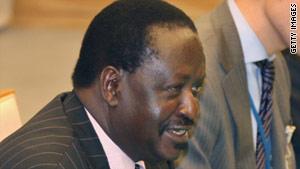 A spokesperson for Raila Odinga said his comments were off the cuff and not a directive to arrest anyone.
STORY HIGHLIGHTS
RELATED TOPICS

Nairobi, Kenya (CNN) -- Supporters and members of the gay and lesbian community in Kenya blasted the country's prime minister Monday after he said anyone engaging in homosexual activity should be arrested.

"The gay community is very scared as the Prime Minister's statement will incite more violence against visible gays," David Kuria, a spokesperson for the Gay and Lesbian Coalition of Kenya told CNN.

Prime Minister Raila Odinga made the comments Sunday while attending a rally in the Kibera neighborhood of Nairobi.

Homosexuality is a crime in Kenya and has a jail term of up to 14 years. The country's new constitution disallows same-sex unions.

Gay rights have been a source of contention in Kenya in the past. In February an armed group raided a government health center that provides HIV/AIDS services to the community. The group insisted they were trying to "flush out the gays," according to a Human Rights Watch report.

A spokesperson of the prime minister's office, Dennis Onyango told CNN that the comments made by Odinga were off the cuff and were not a directive to arrest anyone. Kuria said the comments triggered state-sponsored homophobia.

"All the years of hard work we've done to curtail intimidation, violence and blackmail towards homosexuals has now been adversely reversed," said Kuria.

"Under the bill of rights, people should be treated equally regardless of their sexual orientation," Mute said.

Lillian Leposo contributed to this report.