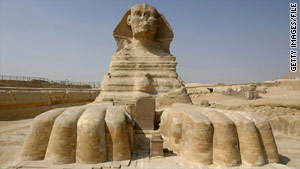 The Sphinx depicts the pharaoh as a human-headed lion, wearing the headdress of the pharaohs.
STORY HIGHLIGHTS
RELATED TOPICS

(CNN) -- Protection from the Sahara's howling dust storms may have helped the Sphinx maintain its steady gaze over the millennia.

Newly discovered walls on the Giza plateau were part of an enclosure to protect the Sphinx from wind-borne sand, Egypt's Supreme Council of Antiquities says.

According to some texts, the walls were built by King Thutmose IV (1400-1390 BCE) because of a dream he had during a hunting trip, the council's secretary general, Zahi Hawass, said Tuesday.

"In the king's dream the Sphinx asked the king to move the sand away from his body because it choked him," Hawass said in a written statement. For the favor, the Sphinx promised to make Thutmose IV king of Egypt.

Until the discovery of sections of the walls buried in the sand on the eastern and southern side of the giant figure, archaeologists believed there was a wall only on its north side. The new sections are part of a larger wall, Hawass said.

Researchers also may have found the remains of a wall dating to the time of King Khafre, whose pyramid is the second largest in Giza.

Khafre's burial complex boasted an unprecedented profusion of statues, among them the Sphinx, according to National Geographic. Carved from bedrock in front of Khafre's pyramid, the Sphinx depicts the pharaoh as a human-headed lion, wearing the headdress of the pharaohs.