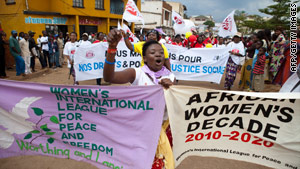 A Congolese woman participates in the 'World March of Women' in the Democratic Republic of Congo on October 17.
STORY HIGHLIGHTS

United Nations (CNN) -- Thirty Congolese women on the border of Angola and Congo were held in a dungeonlike prison and systematically raped by uniformed men, according to U.N. officials.

The Congolese women were part of a group of 150 people who had recently been expelled from Angola.

The United Nations said the women reported they were held for nearly two weeks in early October and raped. The U.N. said three people in the group were killed, including two men and a woman, who died after being repeatedly raped. Those who survived and were released then returned to the Congo in the nude and with no belongings, according to the United Nations.

The rapes were first reported to the United Nations on Saturday.

Video: What did the U.N. know?
RELATED TOPICS

In another region of the Democratic Republic of the Congo, Western Kasai, at least 20 Congolese women also reported being raped, the United Nations said.

The U.N. Office for Humanitarian Affairs said 1,200 expulsions have been reported from Angola. While these expulsions are legal, OCHA spokesman Maurizio Giuliano said they are concerned about the human rights violations of the deportees. The organization encouraged expulsions to happen in a timely fashion with respect for human rights.

U.N. officials were scheduled to meet Wednesday in the region to discuss the possibility of sending a team to investigate these claims further.

These reported rapes come after nearly 500 people were systematically raped during rebel attacks this summer in the Democratic Republic of the Congo.