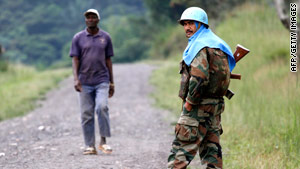 The report said the attacks were compounded by failings on the part of the U.N. stabilization force in Congo.
STORY HIGHLIGHTS
RELATED TOPICS

(CNN) -- A U.N. report slams security forces for failing prevent a wave of mass rapes over several days this summer in Congo.

The preliminary report confirms the rape of at least 303 civilians between July 30 and August 2 in the Walikale region of North Kivu province of the Democratic Republic of the Congo.

The report said the force had not received any specific training in the protection of civilians, and suffered from a number of operational constraints, including their limited capacity to gather information, as well as the lack of a telecommunications system in the area.

"Even in the eastern part of DRC where rape has been a perennial and massive problem for the past 15 years, this incident stands out because of the extraordinarily cold-blooded and systematic way in which it appears to have been planned and executed."

The known victims include 235 women, 52 girls, 13 men, and 3 boys, and many more are believed to have been assaulted. At least 923 houses and 42 shops were looted and 116 people were abducted in order to carry out forced labor. The report said armed groups carried out the attacks.

The report says that a government military operation in 2009, the area has become especially unstable, and that rebels "systematically" took action locals regarded as pro-government.

Investigators were told by victims and local leaders that the main motive for the attacks "was to punish and subjugate the local population whom the attackers viewed as 'traitors.'"

Around 200 members of three armed groups carried out the attacks, the report said. They are Mai Mai Cheka, the Democratic Forces for the Liberation of Rwanda, and elements close to Colonel Emmanuel Nsengiyumva, an army deserter who has also in the past been involved with a rebel group.

The attackers -- armed with AK47s, grenades and machetes -- launched the attacks after they said they had come to provide security for the population. The report said that while one group had been looting and raping in a village, another would ambush fleeing people, who were raped or taken into forced labor.

"They subsequently cut off the main routes into the area and took control of a key hill, which is the only place where telephone communications are possible in the area, thereby preventing the population from raising the alarm," the U.N. said.

Pillay urged the international community to help the Congolese government deal with the problem and said that the victims must be helped.

"I offer the services of my office to help the authorities in their efforts to carry out investigations and bring the alleged perpetrators of these atrocious crimes to justice," Pillay said.

"I fully recognize the enormous difficulties this involves, but we have to do better. Impunity for rape in the past, and now, will simply breed more rape in the future. The cycle of impunity for sexual violence in this part of the DRC must be broken," he said.

The report made recommendations to Congolese authorities and the U.N. Organizations Stabilization Mission in the Democratic Republic of Congo "to improve their systems in order to prevent such situations from arising."