Nigeria's Jonathan says he will run for re-election 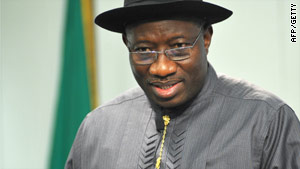 President Goodluck Jonathan said he will "make a covenant," with the Nigerian people if re-elected.
STORY HIGHLIGHTS
RELATED TOPICS

Lagos, Nigeria (CNN) -- A month after Nigeria's ruling party ruled he may stand for re-election next year, President Goodluck Jonathan said Wednesday he intends to run.

Jonathan said he plans to make a formal declaration about his candidacy Saturday.

"In presenting myself for service, I make no pretense that I have a magic wand that will solve all of Nigeria's problems or that I am the most intelligent Nigerian," Jonathan wrote on his Facebook page.

"Far from it. What I do promise is this -- if I am elected president in 2011, I will make a covenant with you, the Nigerian people, to always do right by you, to tell you the truth at all times, to carry you along and most importantly to listen to you, fellow citizens in our communities, and also those of you on this page."

Jonathan's eligibility was in question until last month, when the Peoples Democratic Party said he could run in an open race with other candidates next year.

Under Nigerian "zoning" rules, power must shift to different regions and ethnic groups every eight years.

Jonathan -- who is from the Niger Delta, in the south -- was part of the joint ticket of the late President Umaru Yar'Adua, who was from the north.

Yar'Adua's death in May, after a long illness, upset the order of the zoning. Yar'Adua was elected in 2007 and his southern replacement threatened to halt the north's turn at holding power.

"I know you are tired of empty promises, so I will make only one promise to you today," Jonathan wrote. "The only promise I make to you my friends, fellow citizens and Nigeria, is to promise LESS and deliver MORE if I am elected."