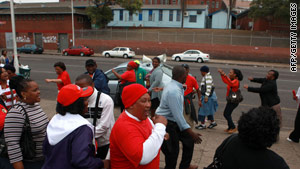 Johannesburg, South Africa (CNN) -- The unions representing more than 1.3 million workers in South Africa have suspended a three-week old strike that crippled hospital services, closed schools and wreaked havoc on other public services, according to a statement Monday from the groups.

The joint statement from COSATU Public Service Unions and the Independent Labour Caucus said the strike was suspended because the government "succumbed to the demand by labor" on the pay raise and other issues.

"This is a victory in the history of public service negotiations where the employer was forced to reopen negotiations," the statement said.

The employer, in this case, is the government, which had said early in the talks that with the one million jobs lost in the past year, it could not afford to meet the 8.6 percent pay hike the unions were demanding. A bigger housing allowance was another demand.

Monday's statement said the government's final concession was to a 7.5 percent pay raise, a 60 percent raise in the housing allowance, and the reopening of negotiations.

"The African National Congress welcomes the suspension of the public sector strike by the unions," a statement from the ruling ANC said. "We believe this is a step in the right decision in ensuring stability and normality in our public sector offerings, particular around education and health services."

The suspension of the strikes is for 21 days, until all unions finalize the consultations on the draft agreement, the COSATU and ILC statement said.

The development is good news for the country's hospitals, which have been minimally staffed by military doctors and nurses, putting the health of thousands of patients at risk because there were not enough services. It also means that schools will reopen Tuesday -- which is likely a relief for final year students whose mock exams were postponed by the strikes.

While this time of year is traditionally "strikes season," this round of walkouts has been marked by the level of violence and intimidation shown by strikers.

Nurses and hospital workers threatened and, in some cases, beat non-striking colleagues and even patients who dared to cross the picket lines.

A CNN employee also saw some strikers outside hospitals carrying large sticks known in South Africa as the "knobkerrie."

Also unusual was the widespread desertion by nurses of their posts: in many cases, babies born prematurely have been left in neonatal wards, and there have been media reports of babies dying as a result. Women in labor were also reportedly turned away from hospitals.

As many as 90 babies were rescued from public hospitals in Johannesburg in one week during the strikes by Netcare, the country's biggest private health care provider.

The group's director, Dr. Richard Friedland, said two-thirds of the babies rescued were just weeks old, some weighed as little as 900 grams -- or just under 2 pounds -- and many were close to death.

At one hospital, he said, dozens of babies had been left to fend for themselves.

Netcare said it also cared for more than 400 people who had been affected by the strikes, including patients suffering gunshot wounds who had been turned away from unstaffed public hospitals.