When did UN know of Congo gang rapes? 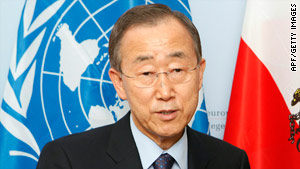 Goma, Congo (CNN) -- The United Nations appears to have been aware of rape by rebels in eastern Congo earlier than it originally said it was, according to an internal e-mail and a humanitarian bulletin.

Between July 30 and August 3, Rwandan and Congolese rebels raided a series of villages and towns, where they gang-raped up to 240 women and four baby boys, according to the relief organization International Medical Corps.

A U.N. spokesman said on Wednesday that the United Nations Organization Stabilization Mission in the Democratic Republic of the Congo (MONUSCO) has put the number of rape victims at more than 240, with more cases being reported.

On August 22, when the rapes were first publicly reported, the number of victims stood at 156. Since then, nearly 100 more victims have been identified.

Video: What did the U.N. know?

According to the organization, many of the victims were raped by two to six men.

The United Nations has said it did not learn about the attacks until August 12, when it was alerted by International Medical Corps.

International Medical Corps said it first told the United Nations about the rapes on August 6. A July 30 internal U.N. e-mail that was relayed to relief agencies working in the area warned that the rebels had taken over the villages, and had already committed one instance of rape.

The town of Mpofi, 52 kilometers from Walikale, had just fallen into the hands of the Democratic Forces for the Liberation of Rwanda, a rebel group.

"A woman was raped there," the e-mail said in French. "Humanitarian workers are said not to go there."

On August 10, the United Nations posted an online bulletin saying that 25 women had been raped in the villages, contradicting statements made by U.N. military spokesman Madnoje Mounoubai and special representative Roger Meece.

Asked to explain the discrepancy, deputy U.N. spokesman Farhan Haq told reporters on Thursday: "We are aware of the existence of a number of e-mails and we are trying to trace exactly how those e-mails were responded to."

He said that about 80 peacekeepers were conducting patrols in an area about four times the size of Manhattan. "The question is -- how much area could they cover and were they able to get into the areas where they needed to be, where the relevant information was?"