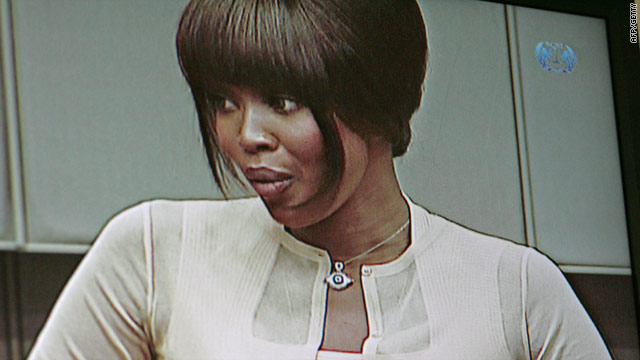 Johannesburg, South Africa (CNN) -- The man who accepted three uncut diamonds from supermodel Naomi Campbell and held them privately for years is stepping down as a trustee of the Nelson Mandela Children's Fund, the fund said.

Jeremy Ractliffe will not run for reelection as a trustee at the end of this month, the fund said Wednesday. He is also resigning immediately as a board member with the U.S. affiliate of the fund, it said.

Ractliffe came under international scrutiny in early August when Campbell testified at the trial of former Liberian President Charles Taylor. She was asked about reports that Taylor gave her uncut diamonds in 1997, a story that prosecutors hoped to use as evidence to prove Taylor used "blood diamonds" to fund a brutal civil war in Sierra Leone.

While Campbell said she didn't know whether Taylor was the source of the diamonds, she testified she gave them the next day to Ractliffe, a friend who at the time was the head of the children's fund.

Ractliffe said in a statement afterwards that he kept the diamonds to protect the reputations of both Campbell and the charity. He handed the diamonds over to South African police after Campbell's testimony.

"Mr. Ractliffe regrets his omission to inform the chairperson, CEO, and the rest of the board of trustees of the NMCF of his receipt of the uncut diamonds until now and acknowledges that had he done so, he and the board could have found a better and lawful way to manage the situation," the fund said in the statement. "He has apologised to the chairperson, CEO, the board, and the NMCF for the anxiety and possible reputational risk his conduct may have caused to the NMCF."

Under South African law, the possession of uncut or rough diamonds is restricted to permit-holding producers, cutters, and toolmakers. Any other person who finds or receives unpolished diamonds is required to take them to a police station immediately.

"Mr. Ractliffe has stated that he acted in what he sincerely believed to be in the best interest of the NMCF and its founder and realizes that he has left himself open to possible prosecution," the fund said in its statement. "For these reasons, he considers it correct and proper for him not to make himself available for reelection as a trustee."

Conflict or "blood" diamonds are diamonds that are illegally traded to fund conflict in war-torn areas, particularly in central and western Africa, according to the World Diamond Council, which represents the commercial diamond trade.

The United Nations defines conflict diamonds as "diamonds that originate from areas controlled by forces or factions opposed to legitimate and internationally recognized governments, and are used to fund military action in opposition to those governments, or in contravention of the decisions of the Security Council."

They are generally in rough form, meaning they have recently been extracted from the earth and not yet cut.

At the height of the civil war in Sierra Leone, it is estimated that conflict diamonds represented approximately four percent of the world's diamond production.