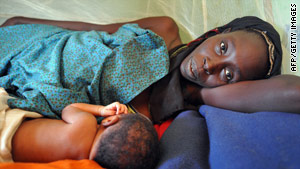 The conflict in Darfur has created a humanitarian crisis, according to aid agencies.
STORY HIGHLIGHTS

United Nations (CNN) -- The security situation in war-ravaged Darfur shows no sign of improvement as fighting has intensified between rebel groups and the Sudanese government, the United Nations Security Council was told Tuesday.

"We are alarmed," U.S. Ambassador Susan Rice said after hearing the report. "This deteriorating security situation is unacceptable and it needs to be effectively addressed."

U.N. Secretary-General Ban Ki-moon pointed out in his latest report that incidents of violence over recent months have surpassed bloodshed in the same time period last year by far.

"May was in fact the deadliest month in Darfur since UNAMID [joint United Nations-African Union mission] has deployed," Rice said. About 400 people lost their lives in May and another estimated 160 died by the government's aerial bombardment in June, officials said.

Envoy Ibrahim Gambari said U.N. staffers and aid agencies are frequently denied access by the government in Khartoum to the areas where fighting is taken place. Ban criticized the Sudanese government for failing to investigate and prosecute cases where peacekeepers are attacked.

"The Darfur process is at a critical juncture," Gambari said. "At precisely the same time as as the security situation has deteriorated, prospects for a negotiated settlement appear to have improved slightly."

The Liberation and Justice Movement (LJM) is currently meeting with the Sudanese government in Doha. "This has provided an important boost to the process," Gambari said.

The rebel Justice and Equality Movement (JEM), however, has walked out on the Doha talks and started attacking the government again, Gambari told the council. The faction of the Sudan Liberation Movement (SLM) under Abdul Wahid has tried to take advantage of this renewed fighting and attacked the Sudanese forces as well.

The rebels have said the government favors Arabs over black Africans.

The two big movements, JEM and SLM are not participating in the talks, sabotaging the peace process. Gambari asked the Security Council to appeal again to the movements to join the negotiations so that an arrangement can be hashed out before the end of this year.

The Security Council has to decide later this week if the mandate of UNAMID will be extended for another year. Ban recommended that the mission continues to "expand the work that it has painstakingly begun."