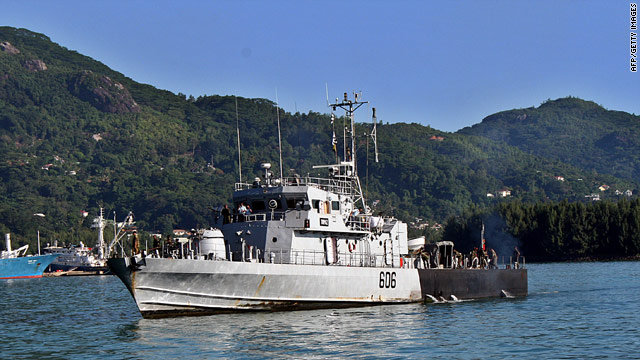 (CNN) -- Eleven Somalis convicted of piracy-related crimes are heading to prison in the island nation of Seychelles, the archipelago's department of legal affairs said in a press release.

The presiding judge of the Supreme Court acquitted the suspects on five other charges related to "acts of terrorism."

On December 5 and 6, the pirates -- who were in two small boats -- attacked the Seychelles coast guard vessel Topaz with automatic weapons. "The aiders and abettors were found in a mother skiff not very far from the attack," said the statement. "Evidence has revealed that the mother skiff had provided ammunitions and firearms to the two attack skiffs before they effected the attack."

The international piracy cases are the first to be prosecuted in the Seychelles. The department of legal affairs said the convictions "will serve as a deterrent for prospective Somali pirates who would otherwise have thought that they would have come into Seychelles waters with impunity."

"There are 29 other suspected and accused Somali pirates who are still awaiting trial in Seychelles or transfer from the Republic of Seychelles to Somalia," the statement said.

The Seychelles are a group of more than 110 islands located off the east coast of Africa in the western Indian Ocean.