By Samson Ntale, For CNN 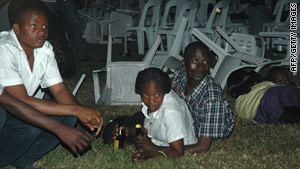 Survivors lie amid overturned furniture after a bombing in a Kampala, Uganda, restaurant on July 11.
STORY HIGHLIGHTS
RELATED TOPICS

"Our condolences go to the people of Uganda for the tragic loss of lives following that tragic incident," said Bingu Wa Mutharika, AU chairman and Malawian president.

The summit, which formally opened Sunday following a week of conferences, is being held at a resort hotel in Munyonyo, about 12 kilometers south of the Ugandan capital of Kampala on the shore of Lake Victoria. On July 11, three bombs at two sites in Kampala killed 74 people and injured more than 80. Many of the victims had gathered to watch the World Cup finals.

The Al-Shabaab militant group, which is currently battling the weak transitional government in war-torn Somalia, claimed responsibility for the bombings, saying they were in retaliation for Uganda's contribution of troops for peacekeeping operations in Somalia. About 6,000 Ugandan and Burundian troops were deployed for the peacekeeping mission more than two years ago in the Horn of Africa nation, which has been at war for more than a decade.

Mutharika, in his remarks, stopped short of making any commitment toward AU peacekeeping missions in Somali and the Darfur region of Sudan. However, AU Commission Chairman Jean Ping said on Friday that Guinea and Djibouti have battalions of soldiers ready to be be deployed to Somalia.

Forty-three heads of state have said they will attend the Summit. Thirty-five had arrived by Sunday, including Libya's Moammar Gadhafi and Nigerian president Goodluck Jonathan.

"While people were enjoying the World Cup, Uganda was having the dark side of it," Jonathan told the conference. "Nigeria condemns that terrorist attack on innocent people in totality and we stand in solidarity with Uganda."

While the theme of the three-day summit is maternal, infant and child health, the subject has been overshadowed by the Ugandan attacks, the deteriorating security situation in Somalia and the attacks by Al-Shabaab.

"We find the terrorist bomb attacks in Kampala despicable," Ping told attendees Friday. "We welcome the pledges of other countries in providing the troops to Somalia, including from Djibouti, which already has a battalion ready."

Ping said he has been discussing the issue throughout the week with various African authorities and by the end of the summit, he expects more nations to pledge troops to Somalia peacekeeping efforts.

The attacks are cause for Africa to change its stance on terrorism, Adris Piebalgs, European Union commissioner for development, told reporters at the summit.

"The recent bombings in Kampala have changed things greatly. We have just witnessed AU leadership during the opening of the summit today paying more attention on terrorism coming (from) Somalia," Piebalgs said. "We are seeing real commitment, with more countries contributing to the AU peacekeeping mission in Somalia." The EU will continue its support of the mission, he said, and urges more African nations to get involved and "deal with the problem."

U.S. Attorney General Eric Holder also spoke at the summit, saying the United States "recognizes that ending the threat of al-Shabaab to the world will take more than just law enforcement. That is why we are working closely with the AU to support the African Union's mission in Somalia ... we pledge to maintain our support."

The United States also recognizes that ending the threat of al-Shabaab to the world will take more than just law enforcement. That is why we are working closely with the AU to support the African Union's Mission in Somalia. The United States applauds the heroic contributions that are being made on a daily basis by Ugandan and Burundian troops, and we pledge to maintain our support for the AU and the AU Mission in Somalia.

Some 20 people have been arrested in connection with the Kampala blasts, Ugandan leader Yoweri Museveni told the summit, and have been giving investigators "useful" information about terrorist operations.

"The organizers of these attacks have been arrested. Their interrogations are yielding useful information," Museveni said.

"I have great contempt for the authors of terrorism," he told the summit. "... They attack innocent people. I recommend (to) the AU leaders not to accept this terrorist arrogance."

Museveni told the summit the mandate of the AU peacekeeping mission in Somalia should be changed, with troops able to beyond Mogadishu and hunt Al-Shabaab and other militant groups. Piebalgs said he would support a wider mandate for the mission from the United Nations Security Council, and urged AU leadership to seek it.

"How can these people dare attack the AU flag?" Museveni said. "These terrorists can be and should be defeated. Let us act in concert and sweep them out of Africa. Let them go back to Asia and the Middle East where they came from."