Why women are economic backbone of Rwanda 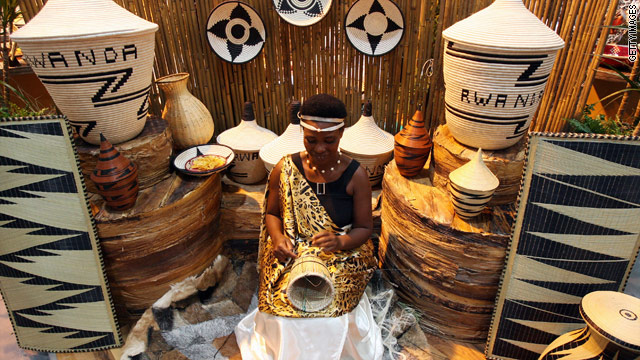 Weaving out of poverty
STORY HIGHLIGHTS

Editor's note: CNN Marketplace Africa offers viewers a unique window into African business on and off the continent. This week the show profiles Rwandan women and how they've transformed the country since the genocide.

Kigali, Rwanda (CNN) -- Six days a week Bernadette Ndizigiye puts her skillful hands to work. Stretched out on the floor of an empty classroom in Kigali, Ndizigiye and 20 other women weave baskets to earn their keep.

Her job at the Agaseke Project, a government run cooperative, has earned Ndizigiye a steady wage, her first savings account, and a taste of financial empowerment.

"I can pay school fees for my children. I can buy them clothes and food, and when I go out to the street people can see that I am really smart," she said.

Women like Ndizigiye are the economic backbone of today's Rwanda. The 1994 genocide left behind a population 70 percent female and when the bloodshed stopped it was women who picked up the pieces and started to rebuild.

Today there are still more women than men, and lawmakers are pushing for reform to help them and Rwanda prosper.

"In Rwanda there is a saying. The woman is the heart of the house, so if your heart is working well the whole body I think is also to benefit," said Dr. Jean Damascene Ntawukuriryayo, a parliamentarian for the Social Democratic Party.

Today there are more women in Rwanda's parliament than any other country in the world. Laws have been passed so they can own land, and wives can legally keep their assets separate from their husbands -- all steps the government is taking to help Rwandese women gain an equal hand at politics and business.

Entrepreneur Joy Ndungutse is another woman who uses basket weaving to earn a living. It's a tradition passed on from mother to daughter in Rwanda and after the genocide it was the one skill women all over the country had in common. When the violence ended, Ndungutse gathered the wives of victims and killers, so they could weave together.

The woman is the heart of the house, so if your heart is working well, the whole body ... is also to benefit.
--Dr Jean Damascene Ntawukuriryayo, parliamentarian
RELATED TOPICS

"That opened up for some women to start talking, and then forgiveness started, so they forgave each other. And now we started talking to each other about business: How can we empower ourselves to get out of poverty?" she said.

Her small group of weavers grew, and in 2005 Ndungutse's baskets were picked up by the department store, Macy's CEO Terry J. Lundgren said he was shocked at the quality of the baskets, and agreed to sell Ndungutse's products in his stores.

"This was not about a gift, this is not a donation, this is about putting women to work," Lundgren said. "Women who have been impacted, lost their families, their husbands, their sons to genocide. They had this skill, and this was just translating that skill into a product that could be sold to create a living for these women."

It takes about four days to make a 30 cm basket, which carries a price tag of $46. A weaver will take $8 home. It makes for a decent living in a country where many earn less than a dollar a day.

Ndungutse's now sells $1.5 million worth of baskets every year, and she oversees 4,000 weavers across the country. Her company has expanded to include designer Kate Spade purses, beaded jewelry and a collection of African bags. But she says, her biggest success is empowering Rwanda's women.

Ndungutse wants women to leave her company to start their own businesses. But there are challenges. Many will need loans, and with high interest rates and Rwandan banks still dominated by men, startup money is still not easy to access.

"So now we are looking, how can we overcome that problem? We must have women in these financial institutions who can understand these problems, "she said.

Parliamentarian Jean Damascene Ntawukuriryayo acknowledges the challenges. He says the government is investing in programs to teach women how to successfully apply for loans. But he says the real solution lies in the minds of Rwandans.

"We have to accept as a Rwandan and we have to accept as men specifically that the woman in Rwanda has to be a key player in our lives and we don't leave you aside or behind any aspect of our life," he said. "Let us empower them economically to make them generate money."

All this helps women like Bernadette Ndizigiye. Her family doesn't go hungry anymore. The money she earned from her weaving job bought her four cows, a color TV and a roofed house in the capital.

Ndizigiye's savings account is also growing. She says her money will be invested in her children, so they too can enjoy a taste of financial empowerment.