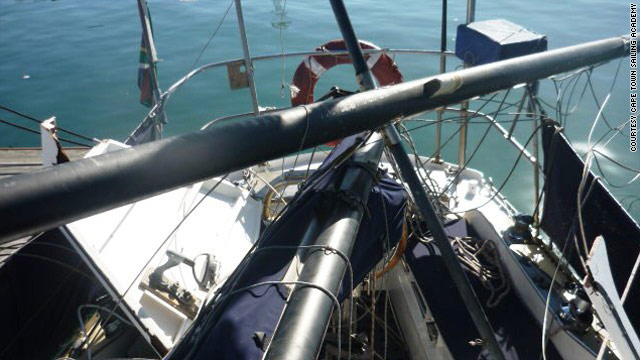 The whale brought down the mast and rigging on the 10-meter long Intrepid.
STORY HIGHLIGHTS
RELATED TOPICS

(CNN) -- A sailor has described her "miraculous" escape after a whale leapt out of the water and crash-landed on the deck of her boat off the coast of South Africa.

Paloma Werner, 50, of the Cape Town Sailing Academy, and her partner Ralph Mothes had been watching the whale from a distance in Table Bay, near Cape Town harbor, when it moved toward their 10-meter vessel and breached 20 meters away.

Southern right whales are a common sight in Cape Town waters during the breeding season from June to November, drawing whale watchers to the region. Werner said the couple -- both experienced sailors -- expected the creature to go under the boat before re-emerging on the other side.

"I looked around and I saw this huge whale coming out of the water and smashing against the side of the boat," Werner told CNN. "The whale slipped back into the water but we just saw the mast with all its rigging and everything flying towards us, and that was scary, actually."

Werner said Mothes ducked behind the steering wheel which bore the impact of the mast. And while the masts need replacing, Werner said the steel structure of the boat was undamaged. "Miraculously nothing happened to us," she added.

A tourist on a nearby boat captured the moment when the whale breached out of the water on camera.

Werner said she had spoken to a local marine mammal expert who had told her that the incident was a "freak accident." Because the couple had been sailing without the engine on, the whale had failed to hear them, she said.

"It was a young southern right whale and he was just having fun. They have very poor eyesight and obviously if they're breaching visibility is very poor. The whale did not intend to attack us, it just did not hear us."

Whale experts have taken DNA samples from blubber left on the deck to see whether they have any existing records on the animal.

Werner said the whale appeared to be unhurt by the experience: "We saw it afterwards and there was no blood or anything. I think for a whale it was just a scratch and a bump."

In future, the couple would make sure they had the engine on while sailing during whale season, she added.

"We were just going out sailing because it was an awesome day. Obviously it's a bonus if you see a whale but we didn't quite count on having one on top of the boat."