American killed in Uganda was dedicated to service 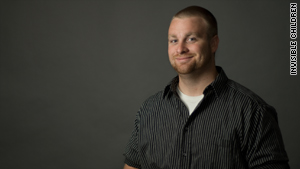 (CNN) -- American Nate Henn, who was killed in the Uganda bomb blasts, advocated for the rights of children forced into fighting in the east African country, a California nonprofit group said Monday.

The 25-year-old former University of Delaware rugby player joined the nonprofit Invisible Children last year and spent much of his time as an unpaid volunteer, traveling with the group around the United States, said spokesman Jedidiah Jenkins. He became close friends with one of group's success stories -- a 20-year-old Ugandan named Innocent.

Henn had arrived to Uganda last week on his first visit to the country. "Now that he had shown Innocent his country, Innocent was going to show him his," Jenkins said.

Innocent, who was standing next to Henn at the time of the attack, survived the bombings, and tried to help Henn, who had been struck by shrapnel, Jenkins said.

The nonprofit organization works with Ugandan children affected by decades of war between rebels and government forces. Rebels abduct the victims -- referred to as invisible children -- and force them to fight the government. Some younger girls are forced into sex slavery.

Aid groups estimate tens of thousands of children have been abducted by one such group, the Lord's Resistance Army.

"These are some of our Ugandan students who fell in love with Nate's wit, strength, character and steadfast friendship," said a post on Invisible Children's website. "They gave him the Acholi name 'Oteka,' which means 'The Strong One.'"

Invisible Children Co-Founder Jason Russell said Henn was in Uganda to visit his relatives and work with the organization. On Monday, two Invisible Children's founders headed to Uganda to assist in returning the remains to his parents in North Carolina.

Henn, who lived in San Diego, California, joined Invisible Children through his sister's work with the organization.

He was staying in Uganda with his aunt and uncle who are missionaries and planned to meet up with the Invisible Children program later in the week. The program has now been postponed.

Brenda Kibler, Henn's longtime childhood friend and fellow church member, said she had e-mailed him after he arrived in Uganda last week, telling him she was thankful he was safe. The two took mission trips together in high school, including a visit to Peru.

"Nate was a very happy, friendly, outgoing person. He loved kids and he just loved people in general," said Kibler, who lives in Wilmington, Delaware. "He was always one of the first people to sign up for community outreach like Habitat for Humanity, missions, whatever."

Henn raised money among friends and family to travel to Uganda for a month -- a lifelong dream.

When they chatted last week, Henn told Kibler he wanted to continue working with charitable organizations.

"He was passionate for doing the work that the Lord did and helping people," Kibler said. "I know for a fact he would be proud to know he died, living the life that he did. And that people are proud of him and know for a fact that he lived a selfless life."

Henn -- a native of Raleigh, North Carolina -- had worked with the nonprofit for a year and a half and raised money to help educate Ugandan students affected by war.

Separately, Henn's brother was hospitalized Monday after being injured in a private plane crash at the airport in Chapel Hill, North Carolina, police and hospital officials said. Jenkins said the brother was aboard the plane of a family friend, en route to be with Henn's family.

At the time of the bombings, Henn was with some of the students he worked with, the group said. Henn is the only confirmed American fatality -- five other Americans were wounded, according to U.S. State Department spokesman P.J. Crowley. The explosion killed at least 74 people, Ugandan officials said Monday. At least 85 people were injured, authorities said.

The three explosions Sunday ripped through two venues, where crowds were watching the World Cup in the Ugandan capital of Kampala. The first one struck an Ethiopian restaurant in a neighborhood dotted with bars and popular among expatriates; two were at a rugby sports center. Henn was watching the game at the rugby center, the organization said.