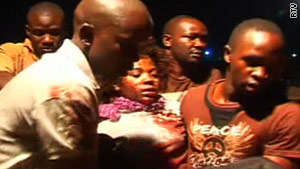 Volunteers carry an injured person from one of the bombing sites Sunday night in Kampala, Uganda.
STORY HIGHLIGHTS

Kampala, Uganda (CNN) -- At least nine people were killed Sunday in a pair of bombings that struck a restaurant and a rugby ground in Uganda's capital as patrons gathered to watch the World Cup final, police said.

Nine people died and others were wounded at an Ethiopian restaurant in Kampala, police spokeswoman Judith Nabakooba said.

But there was an undetermined number of fatalities and injuries at a rugby field where other fans gathered to watch Sunday night's match between Spain and the Netherlands, Nabakooba said.

Some of the injured at the restaurant included six members of an American church mission working with a local congregation, according to the Rev. Kathleen Kind, pastor of Christ Community United Methodist Church in Selinsgrove, Pennsylvania.

"All of our members are accounted for and all of the families have been contacted," Kind told CNN. She added that injuries ranged from broken bones and flesh wounds to temporary blindness and "hearing issues."

She said congregants are now "praying here in the church and in their homes for our members."

The bombs went off within 25 minutes of each other shortly after 10 p.m. (3 p.m. ET), as fans gathered in both locations. There was no immediate claim of responsibility for what Nabakooba called "definite acts of terrorism."

iReport: Are you there? Share photos, video of the scene

Islamic militants battling Somalia's U.N.-backed transitional government have threatened attacks on Uganda and Burundi, which contribute troops to an African Union peacekeeping mission in Somalia. But Nabakooba said the investigation is not yet focused on any specific group.

Journalist Samson Ntale contributed to this report for CNN.