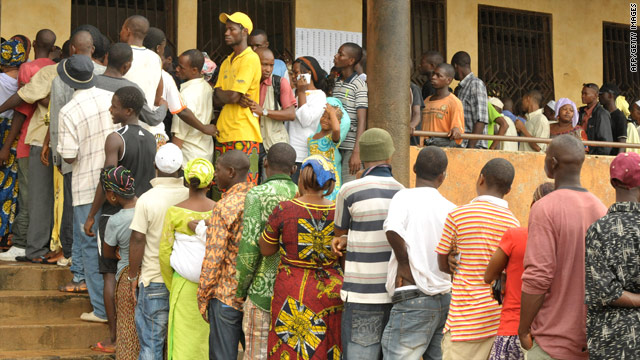 (CNN) -- International observers Monday applauded the first free presidential election in Guinea in more than 50 years, saying it was democratic, inclusive and transparent.

"This is the first time since independence that the people of Guinea have had a chance to be regarded as human beings politically, to express themselves politically," said Carter Center official John Stremlau, who is in the west African nation as a monitor.

"The people were given the opportunity and conducted themselves on election day with dignity, in an orderly and peaceful way," said Stremlau, the vice president of the Carter Center's peace programs and co-leader of its election observation mission.

Results should be available Wednesday, and will almost certainly show a runoff will be required, said Deborah Hakes of the Carter Center.

Voters came out in large numbers, they were enthusiastic and often showed great patience, the Carter Center said in a statement.

Counting of ballots was transparent, in full view of everyone at polling stations, it added.

The country has been ruled by a series of authoritarian and military dictators since it gained independence from France, its former colonial master, in 1958.

The most recent coup came in December 2008, the day after the death of longtime President Lansana Conte, who himself seized power in 1984.

At least 150 people were killed, more than 100 were raped and at least 1,000 were injured, according to the U.S. government and international human rights groups.

The country's electoral officials, cell phone companies and U.S. embassy have worked together to set up a system where voters can send text messages if they see voter fraud or intimidation, U.S. Ambassador Patricia Newton Moller said.