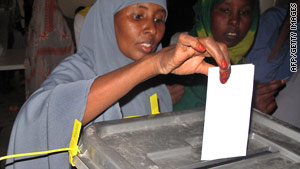 A woman casts her ballot Saturday in Somaliland. More than 1 million had registered to vote, an election official said.
STORY HIGHLIGHTS
RELATED TOPICS

(CNN) -- As ballots were being counted in Somaliland, a breakaway republic in northwest Somalia, officials said Sunday an observer from the electoral commission was killed.

The former British colony held a presidential election Saturday. Voters lined up at polling stations under tight security; more than 1 million had registered to cast their ballots, according to Ise Yusuf Mohamed, chairman of the electoral commission.

Mohamed said the polling was peaceful, but acknowledged small outbreaks of violence, including the killing of the observer Saturday near the town of Lasa Anod. The observer's identity and further details were not given.

Mohamed warned the Somaliland people and the three political parties involved in the election not to celebrate results before they are officially declared.

Voters cast ballots under threats of violence from al-Shabaab, the primary Islamist group leading an insurgency in and around the capital city of Mogadishu in southern Somalia. In an audio message to local media, the group's leader, Sheik Mukhtar Abdirahman Abu Zubeyr -- himself a descendant of Somaliland -- called democracy "the devil's principles" and warned people in Somaliland not to adopt it.

Al-Shabaab militants attacked Somaliland and the neighboring semi-autonomous region of Puntland with simultaneous suicide blasts in October 2008 that killed at least 24 people.

In the election, current President Dahir Riyale Kahin of the ruling party UDUD is opposed by two other candidates.

The northwestern region of Somaliland achieved independence from Britain on June 26, 1960, followed by the rest of Somalia, which became independent of Italy five days later on July 1, 1960, and joined Somaliland to form the state

After the fall of Somali dictator Siad Barre in 1991, Somaliland declared its separation from Somalia, according to the CIA World Factbook. Somaliland has yet to receive international diplomatic recognition as a state but has achieved a level of security and stability unmatched in the rest of Somalia.

Southern Somalia has not seen a stable government since the fall of the dictatorship and has been mired in civil war since its fall. The ongoing conflict has resulted in "an unprecedented humanitarian crisis," according to the U.N. High Commissioner for Refugees.

"In May (2010), the fighting intensified in Mogadishu and displaced more than 270,000 people, causing the number of internally displaced persons to reach 1.5 million people," according to a report on the UNHCR website.