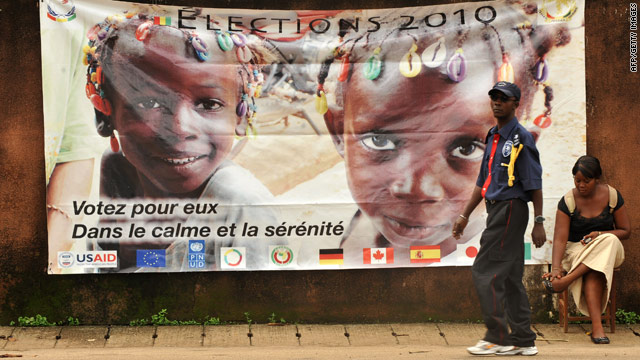 A banner in Conakry, Guinea, on Friday urges people to vote in "calm and serenity" during Sunday's balloting.
STORY HIGHLIGHTS
RELATED TOPICS

(CNN) -- Voters in Guinea cast ballots Sunday in the first free election since the west African nation gained independence in 1958.

"With successful elections, a democracy will be born, and all Guineans together will have together taken a giant step forward," the U.S. ambassador to the country, Patricia Newton Moller, said in a message to the country ahead of the first round of voting.

The country has been ruled by a series of authoritarian and military dictators since it gained independence from France, its former colonial master.

The most recent coup came in December 2008, the day after the death of longtime President Lansana Conte, who had himself seized power in 1984.

At least 150 people were killed, more than 100 were raped, and at least 1,000 were injured, according to the U.S. government and international human rights groups.

The country's electoral officials, cell phone companies and U.S. embassy have worked together to set up a system where voters can send text messages if they see voter fraud or intimidation, said Moller, the U.S. ambassador.