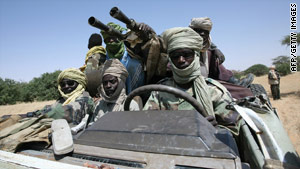 Abdallah Banda Abakaer Nourain and Saleh Mohammed Jerbo Jamus are charged with three counts of war crimes stemming from an attack on African Union peacekeepers in September 2007, the ICC said.

They arrived voluntarily at the court at The Hague on Wednesday following summonses issued last August, the court said.

Their first appearance before the chamber was scheduled for Thursday morning.

Both men are now staying at a undisclosed location, where they will remain for the course of the proceedings, the ICC said.

The men each led armed groups that carried out the attack on the African Union peacekeepers, the court said. Banda led splinter forces of the Justice and Equality Movement (JEM), and Jerbo commanded troops from a breakaway faction of the Sudanese Liberation Army/Movement, it said.

It was the deadliest single attack on the peacekeepers since they began their mission in late 2004.

The voluntary surrender of the two accused was "the culmination of months of efforts," ICC prosecutor Luis Moreno-Ocampo said.

"The appearance of the two suspects means that all the persons we wish to prosecute in connection with the Haskanita attack have now appeared before the court," he said.

The case against Jerbo and Banda is the fourth one dealing with Darfur that has been handled by the court.

In one case, Ali Kushayb, a militia leader, and Ahmad Harun, former minister of state for the interior in Sudan, are still at large. Both face charges of murder, rape, forced displacement and other offenses during the Darfur crisis, which the United States characterizes as a genocide.

The prosecutor offered them the option of voluntary surrender, Moreno-Ocampo said.

"They refused to cooperate, and the judges issued arrest warrants against them," he said. Sudan has refused to extradite them, and has been found in "non-compliance" with U.N. Security Council resolutions as a result, he said.

Sudanese President Omar al-Bashir -- who was just reelected last month -- is wanted by the court for alleged war crimes and crimes against humanity in Darfur. He also remains at large.

A third case involved Bahar Idriss Abu Garda, of Sudan's Zaghawa tribe. He appeared voluntarily before the court last year on charges of murder, directing attacks on peacekeepers, and pillaging in the 2007 attack on the peacekeepers, but the court declined to pursue those charges in February citing insufficient evidence.

The attack on the AU peacekeepers came months before the 7,000-strong force was replaced by a United Nations peacekeeping force of 26,000 troops. The U.N. force, known as UNAMID, is a joint operation between the United Nations and the African Union and took over formally at the end of 2007.

The United Nations estimates that 300,000 people have been killed in the conflict in Darfur, and 2.5 million have been forced from their homes. Sudan denies that the death toll is that high.

The violence in Darfur erupted in 2003 after rebels began an uprising against the Sudanese government. To counter the rebels, Sudanese authorities armed and cooperated with Arab militias that went from village to village in Darfur, killing, torturing and raping residents, according to the United Nations, Western governments and human rights organizations.

The militias targeted civilian members of tribes from which the rebels drew strength.