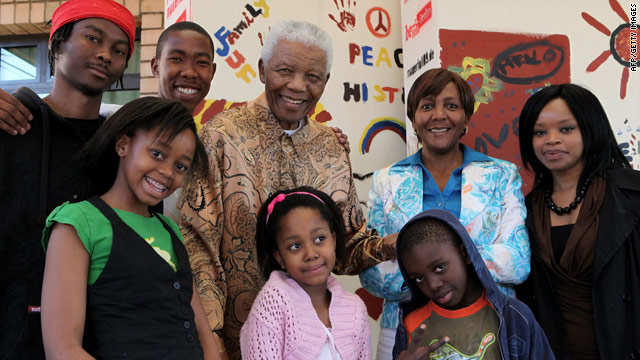 Zenani Mandela, wearing green, with her great-grandfather and other family members in a photo taken on August 17, 2009.
STORY HIGHLIGHTS
RELATED TOPICS

(CNN) -- Former South African President Nelson Mandela will not attend Friday's opening of the World Cup soccer tournament after the death of his great-grandchild in a car crash, a representative said.

"It would therefore be inappropriate for him to personally attend the FIFA World Cup opening celebrations," said Sello Hatang, from the Mandela Foundation.

"We are sure that South Africans and people all over the world will stand in solidarity with Mr. Mandela and his family in the aftermath of this tragedy."

No other vehicle was involved in the wreck, the foundation said.

The driver was arrested for culpable homicide and drunk driving, police told CNN.

Zenani turned 13 on Wednesday. She was one of Mandela's nine great-grandchildren.

The former leader had been expected to attend Friday's World Cup kickoff, his grandson Nkosi Mandela confirmed on Tuesday.