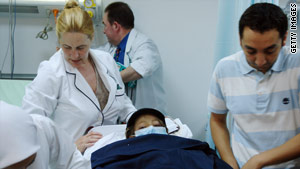 (CNN) -- Low visibility caused by mist and sand created poor flying conditions for the pilot of an Afriqiyah Airways flight that crashed just before landing in Tripoli, Libyan sources with knowledge of the investigation said Saturday.

The plane, an Airbus A330-200, originated in Johannesburg, South Africa, and was at the end of its nearly nine-hour flight when it crashed Wednesday. All but one of the 104 passengers on board were killed.

The sources said that as the pilot approached Tripoli International Airport, he took the plane off auto-pilot hoping to manually land the aircraft. He realized he was in trouble and tried to pull the plane up and turn the auto-pilot back on to give it another try, the sources said.

But the effort was too late and the plane slammed violently into the ground, explaining the condition of the wreckage and damage to the plane's tail at the crash site, the sources said.

An investigation into the crash is under way, and authorities are reviewing the aircraft's flight data recorder.

Meanwhile Ruben van Assouw, the 9-year-old sole survivor of the plane crash, has returned home to the Netherlands.

He suffered multiple fractures to his legs and underwent surgery at Al Khadra Hospital, said a doctor at the hospital who declined to give her name.

Both of Ruben's parents and a brother were killed in the crash, a Dutch foreign ministry representative said.

Ruben's family issued a statement Friday expressing gratitude to people who have helped them, such as Libyan hospital professionals and Dutch envoys, as well as the outpourings of sympathy from citizens in both countries.

The family also thanked "the vast majority of the Dutch media for respecting our privacy."

The family, which will raise Ruben, said the boy knows that his parents and brother were killed.

"Considering the circumstances, Ruben is doing fine. He is sleeping a lot; now and then he wakes up and is then lucid," the family said in the statement. "He has drunk a little, and has seen the flowers and cuddly toys."

Ruben's family said it has to deal with "two kinds of grief" -- the sorrow the boy is enduring and the sadness over the loss of the other family members.

"The coming period will be very difficult for us," the family said. "We hope that all the media will respect our privacy."

More than two-thirds of the passengers killed in the plane crash were Dutch, the ministry said.

Passengers from Libya, South Africa, Belgium, Austria, Germany, France, Zimbabwe and Britain were also among the victims, the airline said on its Web site. The Dutch foreign ministry said Friday it is sending more experts to Tripoli to help Libyan authorities and Dutch colleagues identify the victims.