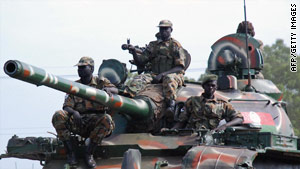 A file photo of Sudan People's Liberation Army soldiers in Juba on May 26, 2009.
STORY HIGHLIGHTS

The fighting was part of an outbreak of violence over the weekend that killed as many as 54 people on Saturday, according to Ashorooq. Dozens more were wounded.

Sudanese government officials accused SPLA of instigating the violence, according to Ashorooq.

However, Suleiman Isaq, the secretary general of the SPLA in southern Darfur, denied to Ashorooq that the organization planned the fighting.

According to Ashorooq, Isaq said the clashes escalated from recurring fighting between members of the SPLA and the tribe, adding that SPLA members live peacefully in that area alongside the tribesmen.

Isaq also told Ashorooq that SPLA officials are working with local government to contain the violence.