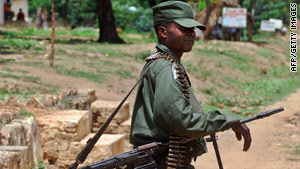 (CNN) -- Eight staff members of the International Committee of the Red Cross who were kidnapped April 9 in the Democratic Republic of the Congo were released Friday, the Red Cross said.

The seven Congolese and one Swiss national had been held by an armed group since April 9. They were held after assessing the needs of displaced people in the South Kivu province of the Democratic Republic of the Congo, the aid group said in a statement.

"We are relieved and happy to have our eight colleagues back, in good health," said Franz Rauchenstein, head of the Red Cross delegation in the Democratic Republic of the Congo. "Their return marks the end of a series of long, hard days, not only for them but for their families and friends."

Violent ethnic clashes in the South Kivu, related to the 1994 genocide in neighboring Rwanda, have forced thousands of civilians from their homes in recent months, the Red Cross said.

"It is in order to protect and assist armed-conflict victims that we have been carrying out our activities in the area," Rauchenstein said.