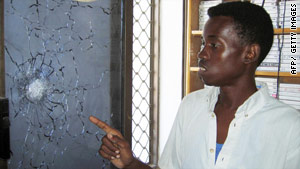 Mogadishu's Radio Shabelle has seen violence before. In 2007, security forces fired a bullet into a station window.
STORY HIGHLIGHTS

(CNN) -- Roars, growls and galloping hooves replaced music Tuesday on some of Mogadishu's radio stations in a protest of a ban on music imposed by Islamic extremists.

Radio Shabelle, along with the stations Tusmo and Hornafrik, were responding to threats from Muslim militant groups that believe music is un-Islamic and want it prohibited.

Mogadishu's 14 private radio stations stopped playing music Tuesday after Hizbul al-Islam, an Islamic extremist group, issued a 10-day ultimatum. The threat was backed by the main militant group al-Shabaab, which has been linked to al Qaeda.

A statement from the National Union of Somali Journalists said several stations received calls, warning them that there would be consequences if they failed to comply with the ban within 10 days.

But the three stations decided to broadcast the noises instead of music. Radio Shabelle announcers could be heard speaking on air, backed by the sounds of hooves, ocean waves, gunfire -- even the roars and growls of big cats.

A radio station director, who could not be identified because of safety concerns, said the stations were unhappy about the ban but were forced to comply "because of fear for our lives."

A Somali journalist, who also asked not to be identified, said there is widespread fear that this marks the beginning of a wider plot by extremists to silence independent media. He fears that female journalists may become the the next target.

Hizbul al-Islam is one of many rebel groups operating in the country. The group has a complicated relationship with al-Shabaab; between them, the two groups control much of Mogadishu, and several radio stations are in neighborhoods under their control.

Somalia has not had a stable government since 1991. Islamic militant groups are fighting the government in an effort to implement a stricter form of Islamic law, or Sharia.