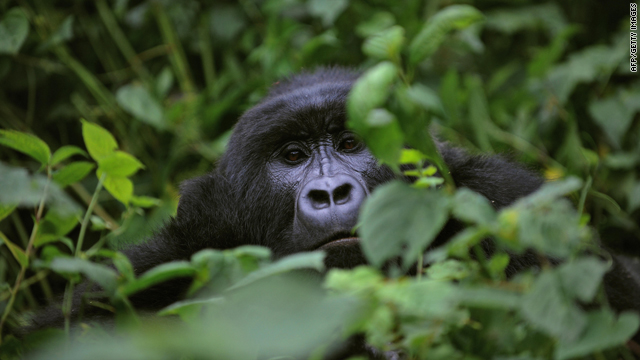 A gorilla looks on while relaxing in a clearing on the slopes of Mount Mikeno in the Virunga National Park on November 28, 2008.
STORY HIGHLIGHTS
RELATED TOPICS

(CNN) -- Gorillas may go extinct in much of central Africa by the mid-2020s -- victims of a meat trade, of logging and mining, and even the Ebola virus, a new report says.

Unless action is taken to guard the gorillas' habitat and counter poaching, the dire prediction will come to pass, said the joint report from the United Nations and Interpol released Wednesday.

Until now, the Congo Basin in Central Africa had been a rainforest refuge for gorillas and other apes.

But the threats to the gorillas' survival are so acute that a similar study that predicted only 10 percent of the gorilla population will remain by 2030 is now considered too optimistic.

That study -- conducted in 2002 -- did not take into account the rise in the demand for timber and metals destined for Asia, the Middle East and Europe.

The situation is especially critical in the Democratic Republic of the Congo.

There, militias have seized large chunks of gorilla land and logged and mined it. They have done so because the illegal trade in timber and in metals such as gold and coltan -- used in cell phones -- generates between $14 million and $50 million a year for them, the report says.

The money helps fund the militias' battle against the Congolese army.

As the militia fight the army, the insecurity in the region has driven thousands into refugee camps. Professional poachers have taken to providing "bush meat" -- wild animal meat -- to the refugees and to the workers in the mining and logging camps. And increasingly, that meat comes from apes, the report says..

Adding to the gorillas' woes are outbreaks of the Ebola virus that have killed thousands of great apes. By some estimates, 90 percent of the infected animals will die.

Among the good news in the report: A survey in one conflict zone in the eastern Democratic Republic of the Congo discovered 750 critically endangered Eastern lowland gorillas.

Also, mountain gorillas in the Virungas, an area shared by Rwanda, Uganda and the Democratic Republic of the Congo, found that the apes survived during several periods of instability.

The report credited the survival to stepped up patrols by park rangers who targeted poachers and loggers.

But this has come at a price, the report said: More than 190 Virunga National Park rangers have been killed in recent years allegedly at the hands of militias concerned about a loss of revenue.

The report 'The Last Stand of the Gorilla - Environmental Crime and Conflict in the Congo Basin' can be accessed at http://www.unep.org/