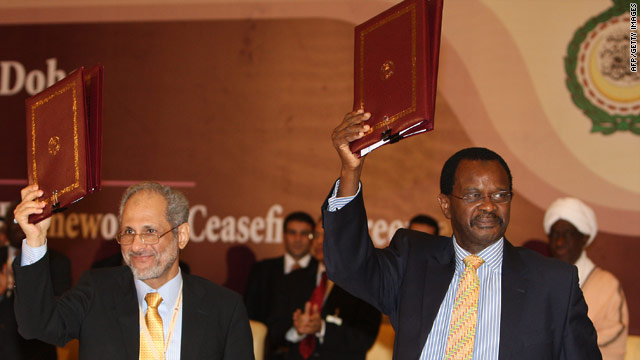 (CNN) -- The Sudanese government signed a framework cease-fire agreement Thursday with a rebel group from the country's war-torn Darfur region, according to state-run media.

The agreement was signed in Doha, Qatar, by Sudanese official Ghazi Salahuddin and Al-Tigani Sessi of the Movement for Liberation and Justice, according to SUNA, a Sudanese state-run news agency.

The Movement for Liberation and Justice is an umbrella group comprised of 10 rebel groups that united last month, according to the Sudan Tribune.

Thursday's signing comes less than a month after the Sudanese government signed a framework peace agreement with the rebel Justice and Equality Movement.

The framework agreement is considered the first step toward the achievement of a lasting peace accord in Darfur.

The signing Thursday, which took place at the Ritz Carlton Hotel in Doha, according to the Qatar news agency, was attended by Sudan's vice president, Ali Osman Mohamed Taha, and a number of other high-ranking officials from other countries, including Chad and Eritrea, according to SUNA.

Qatar has been mediating talks between the two sides in the Darfur conflict, which erupted in 2003 after rebels began an uprising against the Khartoum government.

The government launched a brutal counter-insurgency campaign, aided by government-backed Arab militias that went from village to village in Darfur, killing, torturing and raping residents, according to the United Nations, Western governments and human rights organizations.

Sudanese President Omar al-Bashir is under pressure to end the fighting, particularly after the International Criminal Court charged him with genocide last year in connection with the government's campaign of violence in Darfur.

In the past seven years, more than 300,000 people have been killed through direct combat, disease or malnutrition, according to the United Nations.

An additional 2.7 million people fled their homes because of fighting among rebels, government forces and allied militias.