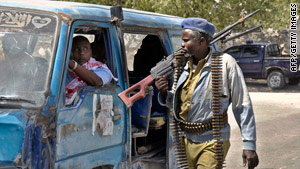 (CNN) -- Heavy fighting flared in the Somali capital Thursday, a day after a battle between government forces and Al-Shabaab rebels left 29 dead and scores injured.

At least 80 people were wounded in the fighting, which started Wednesday morning and continued all day, according to government and medical officials.

Most of it occurred in the north of Mogadishu, where a majority of militants allied with Al-Shabaab are believed to be in control, authorities said.

A heavy shell fell in Jungal neighborhood in the northern part of Mogadishu, killing 13 people and wounding another 13, according to Abukar, who witnessed the fighting.

"We have Al-Shabaab prisoners from yesterday's fighting and most of them are minor children who have been brainwashed by the group," he added.

Al-Shabaab, the al Qaeda proxy in the country, was declared a terrorist organization by the United States.

It's waging a war against Somalia's government in an effort to implement a stricter form of Islamic law, or sharia.

Somalia has not had a stable government since 1991, and fighting between the rebels and government troops has escalated the humanitarian crisis in the famine-ravaged country.