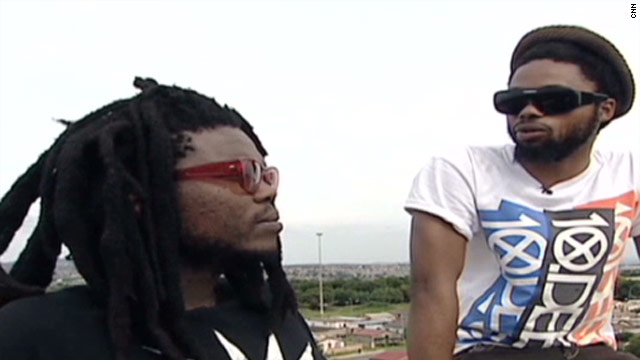 Last year's debut album "After Robots" was recorded in the United States and released on an American label. It has received critical acclaim for its eclectic sound, mixing styles including prog rock and dub with traces of traditional South African rhythms.

While their music has a global appeal, the band says its roots are firmly in South Africa. BLK JKS drummer and bassist grew up in the Johannesburg township of Soweto, while the band's singer and drummer grew up 30 minutes away in the neighborhood of East Rand.

Drummer Tshepang Ramoba told CNN, "It is important to know where you live, where you come from, your history, what's happening in the world."

Although their fusion of styles is a creating a stir outside South Africa, it took a while for their music to be accepted in their home country, where four black musicians playing rock music is still a rarity.

Guitarist Mpumi Mcata told CNN, "In the beginning people were like, 'oh, they are black, they play rock ...'

But Mcata said the band's music is ultimately traditional, with their rock sound based around "ancient rhythms."

Ramoba agreed that South African traditions are at the heart of the band's music. "The last song on the album is called Tselane, a story we used to be told when we were young before we would go to bed," he said.

"Those fables connect to how we're living now," added Mcata.

Although the band have toured all over Europe and the United States, they say their most memorable gig was in Soweto itself, where the South African dance music of Kwaito reigns supreme.

"So in Soweto, the fact that they liked us is a huge thing. When we started playing everyone just stayed and danced. It was the best."