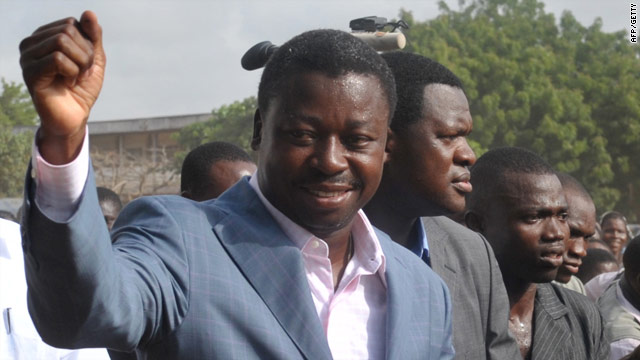 "The opposition will contest the results" in court and on the streets, Union of Forces for Change representative Kofi Yamgnane told reporters Sunday.

Hundreds of demonstrators gathered at the opposition party headquarters in Lome, the capital, while its members were holding a meeting to decide how to respond to the results.

United Nations Secretary-General Ban Ki-moon called on political leaders and their supporters to remain calm after the announcement of provisional results.

Ban asked political leaders and their supporters "to refrain from any action that might compromise the peaceful conclusion of the electoral process." He urged that all claims be presented "through legal means and institutions in a fair and transparent manner."

He did not take a position on the results themselves in his statement, which was released Saturday.

Gnassingbe succeeded his father, President Gnassingbe Eyadema, who died five years ago after ruling since 1967.

But the younger president was forced to briefly step down after international condemnation for what many perceived as the unconstitutional move to succeed his father.

He later won popular elections for a five-year term in 2005.

Under the Togolese constitution, there are no limits on the number of times one can run for president. A controversial constitutional amendment in 2002 removed a two-term limit.

International organizations, including the African Union and the European Union, sent hundreds of observers to the country for the elections, but have not issued official statements on the validity of the preliminary results.

But the E.U. mission to Togo said Saturday that the elections took place "in an atmosphere of calm and with no major incidents."

The results from Thursday's election will go to Togo's constitutional court within eight days, where they are open for appeal. That is when the opposition will launch its challenges, the UFC spokesman said.

The court is scheduled to announce final results later this month.