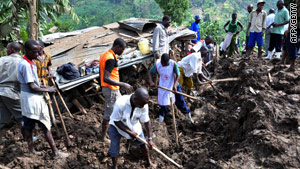 Residents of Mbale dig for bodies; the steep terrain has meant heavy machinery could not be used

About 300 people were missing and feared dead after Monday's landslide, including 100 students, said Catherine Ntabadde, a spokeswoman for the Ugandan Red Cross Society. At least 87 bodies had been recovered, she said.

Officials have lowered the death toll, from 106, since Tuesday. "We found some body parts, which we have decided not to count as a whole for now," said Musa Ecweru, the minister for disaster preparedness.

Hundreds of rescuers, including the nation's military, used shovels and hoes to dig through the mud in a desperate search for survivors. Residents from nearby villages joined in, some armed with garden tools, while others used their bare hands.

Have you been affected by the mudslides? Share your images, video

"It's impossible to take bulldozers and any heavy equipment to the site. The earth is very delicate and heavy machinery may cause more landslides," Ntabadde said. The terrain also is inaccessible by road, Ecweru said.

The area is so steep that evacuees are walking about 6 miles (10 kilometers) to nearby camps. The Red Cross, United Nations and World Food Program are helping provide food, water and other essentials, such as blankets, to the displaced, officials said.

They've also set up mobile clinics to provide medical care. Ugandan President Yoweri Museveni flew to the site of the landslide Wednesday and attended a funeral for victims.

A select few attended the service, because of the risk of more landslides, Ecweru said. Museveni ordered the nearly 4,000 people living nearby to be evacuated to permanent locations in less hilly terrain.

"We have not found anyone alive today," Ntabadde said. "We don't expect to find any more people alive." Most of the bodies were recovered from a hospital engulfed by the landslide after residents sought shelter, officials said.

The neighboring village of Bamuyaka in Bubita Sub County also has been affected. Flooding also has destroyed roads and washed away bridges in at least seven districts. The landslide occurred near Mount Elgon, on the Kenya-Uganda border.