In search of world's rarest and most endangered gorilla 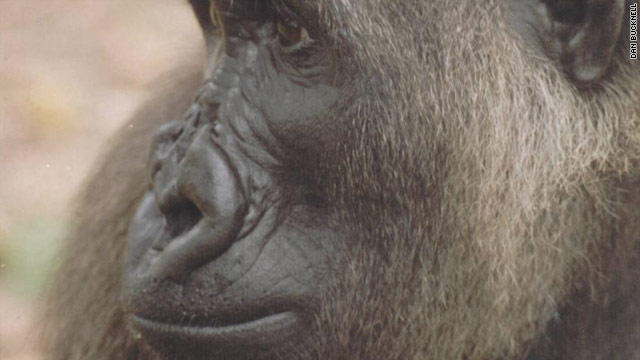 The Cross River gorilla is the world's most endangered gorilla . It's estimated that there are only 300 left in Nigeria and Cameroon.
STORY HIGHLIGHTS

Cross Rivers, Nigeria (CNN) -- We shouldered our packs -- leaving behind us a small town of wooden shacks, and making our way up a steep climb into the Mbe mountains and Nigeria's last rainforest.

In this area there's no mobile phone network and only a few hours of electricity a month for the local community.

One of our guides waved towards the forest ahead of us: "We used to hear the gorillas roar from here in the town," reminisced Joseph Njama. "But not anymore."

We're searching for the world's rarest and most endangered gorilla -- the Cross River gorilla. In Nigeria and Cameroon there are thought to be only 300 left, and in these Mbe mountains maybe only 30 remain.

The gorillas are under threat from local poachers, who sell the meat in local bush-markets. So far, it seems the rugged terrain of the Mbe mountains has saved the gorillas from extinction -- difficult access and thick forests make it a perfect hiding place.

But with Nigeria's burgeoning population of 150 million people -- the small gorilla population is under increasing pressure.

Our guides -- or "eco-guards" -- are ex-poachers now turned guardians for the gorillas, patrolling the rainforest daily for hunters. But even they see the gorillas maybe only two or three times a year.

As we trekked through encroaching farmlands, scattered banana plantations and then cutting our way through the rainforest, eco-guard Joseph Njama would point out the few signs that show the gorillas still inhabit the region.

"These are the teeth of the gorilla," Joseph pointed to teeth-markings in an old fruit. "Look at them biting it -- forcing it to break."

We used to hear the gorillas roar from here in the town. But not anymore.
--Joseph Njama, eco-guide, Mbe Mountains, Nigeria
RELATED TOPICS
RELATED TOPICS

The U.S.-based Wildlife Conservation Society (WCS) and the local Cross River government are throwing their support behind a community-based conservation program.

The nine local communities living in the shadow of the Mbe mountains have come together to try to protect the gorillas -- holding regular meetings on how to stop poachers and farmland encroachment.

But disagreement over exactly how is proving divisive.

And the conservation support they've been promised by government, says local king Oduo Abang-Aban, has not been forthcoming.

"We're trying to cry to government -- we who are trying to keep this mountain safe ... otherwise some people will encroach."

And so the consequences of neglect and delay remain.

Emmanuel Oshibeka untied his small nylon bag, and one by one, pulled out four gorilla skulls.

He was jailed for only six months after he killed three gorillas in 2006. A tenth of the local gorilla population in one day.

"They were in a group and I was with a dog. The dog ran and met them and they began to shout. Then I also entered and I saw them on top of a tree," Emmanuel explained the moment when he killed the three gorillas.

"I began to shoot three of them in the trees, and as they fell to the ground I went and slaughtered them," Emmanuel pulled his hand across his throat in a graphic description of how he killed them.

WCS now help him tend bees as an alternative to hunting. But so far, only one out of five hives have successfully colonized.

"When I do not succeed in beekeeping and there's no money from there -- I can still go back to the forest," Emmanuel warned.

But as we continued our search through the rainforest we find further signs of life. Bent branches and leaves all folded into a small bed on the ground -- a gorilla nest only two to three weeks old.

"The only way we can get information on the population is by finding nests such as this," explained Inaoyom Imong, a local biologist with WCS,

"To give an idea of the population size and ranging behavior. And also looking at the food remains you can see what plants the gorillas are eating."

As he pulled out a tape measure to record the size of the nest, Inaoyom described an encounter with the gorillas.

"It's exciting -- they're huge animals, very charismatic -- they're a beauty to withhold. The way they charge at you, roar, open their fangs -- it's exciting, fearful but very exciting."

And finding nests like this, says Nigerian WCS Director Andrew Dunn, is a hopeful sign that their efforts are not in vain.

"There are people who wrote off the Cross River gorilla entirely, but we've shown that although there are only three or four small groups left -- there are corridors left between these remaining groups. So the future is not entirely bleak."

As we trekked out of the mountains and the end of our three day trip, the sound of singing and church service rang through the communities banana plantations -- a warning of human encroachment towards the forest.

We didn't see any gorillas but the more these gorillas fear humans and stay hidden the better their chances of survival.