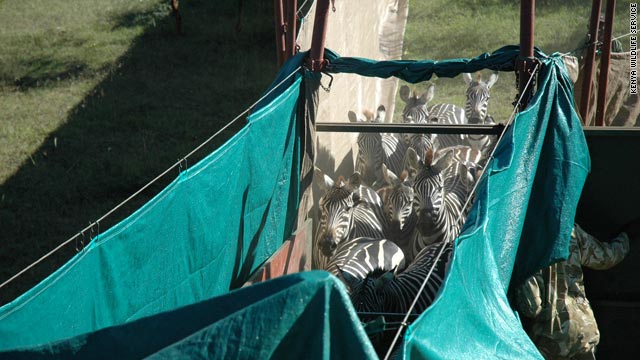 Zebras are herded up for transport to Amboseli where they will be used as prey for starving lions.
STORY HIGHLIGHTS
RELATED TOPICS

Nairobi, Kenya (CNN) -- Kenyan wildlife officials are ferrying thousands of zebras and wildebeest to a park in the country's south to feed starving lions and hyenas, and prevent a conflict with humans.

The animals will be hauled from four locations to restock Amboseli National Park's population, which lost 80 percent of its herbivores in a recent drought, said Kentice Tikolo, spokeswoman for the Kenya Wildlife Service.

"It was the worst drought in 26 years," Tikolo said. "The Amboseli ecosystem was severely affected. ... Lots of herbivores died, carnivores don't have anything to feed on, and have been attacking neighboring livestock."

The imbalance has sparked a row with villagers who lost animals in the drought and have threatened to kill lions and hyenas preying on remaining livestock.

Should the zebras be brought in to help the lions?

"There are only 2,000 lions left nationwide, and we are concerned because the numbers are dropping," the spokeswoman said.

"Maasais are getting angry and threatening to spear them -- the human versus wildlife conflict is getting out of hand -- and our carnivores are already greatly endangered."

About 4,000 zebras and 3,000 wildebeest will be transferred to Amboseli. The zebras will go first. The wildebeest will follow, after calving season, Tikolo said. Once at Amboseli, they're expected to breed and sustain the lions over the long term.

Shipping the animals from Soysambu Conservancy in the Rift Valley and three other nearby locations will cost about $ 1.4 million, according to Tikolo.

The animals are herded into a funnel-shape enclosure using helicopters and loaded into trucks to Amboseli. From there, they are released into the wild, she said.

Tourism is the second-largest source of foreign exchange in the east African nation. About 20 percent of the income comes from tourism, with Amboseli as the second -highest earner, Tikolo said

Lions are among the big five -- the list of top wildlife tourist attractions in the nation. Others are elephants, leopards, rhinos and buffalo.