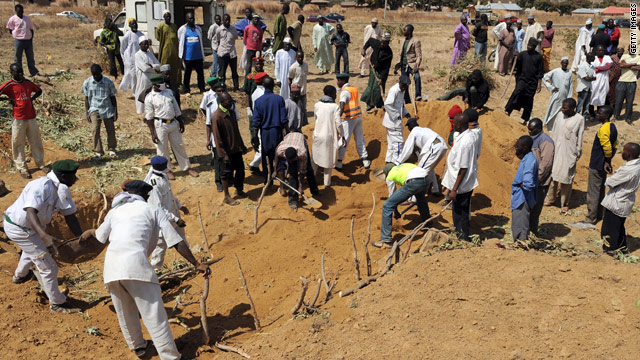 Witnesses told Human Rights Watch that armed men attacked Kuru Karama in central Nigeria on Tuesday, "killing many as they tried to flee and burning many others alive," the international organization said Saturday.

Community leaders from Jos, a city about 19 miles north of Kuru Karama, and journalists told the organization that later in the week they saw dozens of bodies lodged in wells or sewage pits. The bodies of 121 people, including 22 children, had been recovered, the organization said. Most of the homes in the town were burned down, along with three mosques, the group said.

Those interviewed by the group said they thought the attackers were Christian, Human Rights Watch said. But even Christians were not spared. When a Christian pastor tried to stop the attacks he was beaten, a Muslim imam told the group.

Human Rights Watch called on Vice President Goodluck Jonathan to open a criminal investigation into the deaths based on the reports the groups said were credible.

Officials are still tallying death figures in the latest round of violence, said H.A. Angulu, director of public communications for the Ministry of Information and Communications. 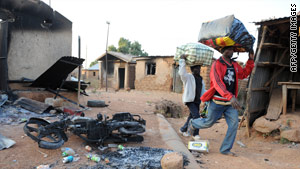 "Yes [the clashes] occurred, but I cannot confirm any numbers," he told CNN. "At this time the government is still compiling figures of those people affected and of those displaced in Jos. They are accounting for the deceased and missing. At this time I cannot confirm the number of dead."

Earlier this week, dozens were reportedly killed in clashes in Jos. Angulu did not specifically address the reports about Kuru Karama.

On Thursday, Jonathan declared in a televised address that the attackers in the state of Plateau would be held accountable, according to Human Rights Watch.

Police were called to end the attacks, but they did not, the group reported witnesses as saying.

Hundreds have died in clashes between Christians and Muslims in central Plateau state in the past decade.

The most populous country in Africa, with a population of more than 150 million, Nigeria is almost evenly divided between Muslims and Christians.

With more than 78 million Muslims, it has the sixth largest Islamic population in the world, according to a study last year by the Pew Forum on Religion and Public Life.

A curfew was imposed Tuesday -- the same day as the reported attack in Kuru Karama -- in Jos after violence flared up there following unrest on Sunday. A local activist said 69 people had been killed and about 600 injured in the most recent outbreak. Thousands more were displaced, seeking shelter in military and police headquarters, said Sani Shehu of the Civil Rights Congress in Jos.

There was no independent confirmation of Shehu's figures.

It is unclear what sparked the latest violence.