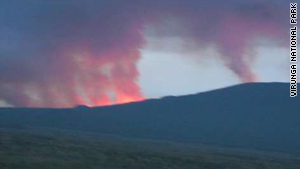 Rangers in Virunga National Park reported hearing a loud explosion at 3:45 a.m. and then seeing lava flowing from the crater of the 10,033-foot volcano.

"I first thought (it) was the sound of war. I thought there was fighting again near our park station," said Innocent Mburanumwe, warden for the southern sector of Virunga National Park. "Then I saw the mountain was on fire with sparks flying. We could see that we were not in immediate danger here at Rumangabo, but there are many people who live to the south of the volcano, where the lava is heading as I speak."

Nyamuragira is 15 miles (25 kilometers) north of the city of Goma and its 600,000 residents, but Mburanumwe said in a blog posting that lava flows from the mountain were unlikely to threaten human populations.

Lava flows from another park volcano, Nyiragongo, destroyed parts of Goma in 2002.

The wildlife authority said the Nyamuragira eruption was likely to destroy habitat for 40 chimpanzees on the volcano's lower slopes.

Virunga National Park is also home to 200 endangered mountain gorillas, but they live on the slopes of the Mikena volcano to the east of Nyamuragira.

The Smithsonian Museum of Natural History calls Nyamuragira the continent's most active volcano, with 42 eruptions since 1885. Its most recent eruption ended in December 2006.