(CNN) -- As historically high flood waters receded in Tennessee on Wednesday, dramatic stories of tragedy and survival emerged, including that of a woman who saw her husband and daughter swept away.

Sherry Qualls watched in horror as chest-deep water washed away her husband and daughter as he tried to save the girl from a rushing creek roaring through their backyard in Linden, Tennessee, on Sunday, according to CNN Nashville affiliate WSMV.

"From his neck up, he was staring at me," Qualls said of her husband Bobby. "He didn't say anything, just staring at me. She was screaming for her daddy to help her, and then by the time the rescue squad got her, I didn't see them any more."

Their bodies were found the next day, washed almost a mile away, the affiliate reported. 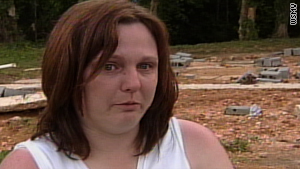 Sherry Qualls lost her husband and young daughter to the Tennessee floods.

"He was a hero," Qualls said Wednesday of her husband, who earlier had rescued the couple's son from floodwaters. "He sacrificed himself for his kids, that's what I think."

Surveying the property where her home once stood, Qualls said it's hard to believe her husband and daughter are gone.

"Every time I drive in the driveway, I see my daughter standing at the door smiling, and him, too, and I expect them to call me and ask where I'm at," she said.

Linden is located between Nashville and Memphis in western Tennessee.

CNN iReporter Nathan Clark went to his father's house in Dickson, Tennessee -- west of Nashville -- on Saturday to help him salvage possessions as waters from a flooded creek rose on his dad's property. Clark says they got out just in time.

"The water was at the top of his truck's hood." Clark said. "If we had stayed any longer, we wouldn't have gotten out of there."

With waters receding on Wednesday, Nashville Mayor Karl Dean announced that most city government offices would reopen Thursday and that city bus service would be restored.

Nashville students will have another day off Thursday, though teachers and other staff will return to work.

"The news is largely good," Dean said at a Wednesday evening press conference. "We're making progress and we'll continue to make progress in the days ahead."

The weekend deluge in the Mid-South has swelled many rivers to historic levels, turned roads to lakes and caused at least 28 deaths. The rains were especially cruel to Tennessee, killing 19 and immersing landmarks like the Grand Ole Opry. Two Nashville residents are still missing, Dean's office said Wednesday night.

Many area waterways remained well past flood level on Wednesday. The Cumberland River, which cuts through Nashville, stood at just over 48 feet on Wednesday evening -- about 13 feet above flood stage -- said Jim Moser, a forecaster with the National Weather Service.

One Nashville neighborhood, Metro Center, remained closed to residents and workers Wednesday because of standing water. The city allowed some business owners and managers to survey their businesses for a few hours in the afternoon but limited access to people in trucks and SUVS and made clear that they entered the area at their own risk.

With one of Nashville's main water treatment plants still closed from flooding, the city asked residents Wednesday to use water only when absolutely necessary, telling them to put off washing dishes and to limit toilet flushing.

"Citizens are using water at a greater rate than we can treat it and pump it out to the community," said Sonia Harvat, a spokesman for Nashville's water department, in an e-mail message. City officials said Wednesday that the city would be forced to rely on bottled water unless more people started conserving.

Still, flood waters should recede significantly in the next couple of days, the National Weather Service's Moser said.

"We're not expecting a significant amount of rain through Monday," he said. "It might amount to a quarter or half inch but not enough to affect things."

After an aerial tour of central Tennessee Wednesday, Gov. Phil Bredesen warned residents to beware of con artists looking to capitalize on the flood response.