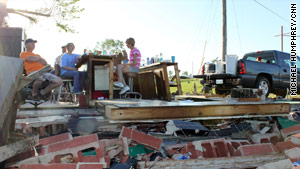 Damage was severe in Yazoo City, Mississippi, where numerous homes were destroyed.

(CNN) -- A tornado almost a mile wide tore through Mississippi on Saturday, killing at least 10 people and causing significant injuries and damage as it raked cities from the central western border with Louisiana northeastward to Alabama.

Two of the dead were children and one was a 3-month-old baby, according to Mississippi Emergency Management Agency (MEMA) spokesman Jeff Rent.

The death toll is expected to rise as rescue crews reach hard-hit areas where structures have been badly damaged, said another MEMA spokesman, Greg Flynn.

Mississippi Gov. Haley Barbour, who was in Yazoo City where his home is located, called the twister "gigantic" and said that "in places [it] seemed to be to be several miles wide."

Some residents were trapped in badly damaged homes, he said.

"They're working to get to the people and rescue as many as they can," said Dan Turner, a spokesman for the governor, reporting "significant injuries" in at least three counties.

Residents from the region shared tales of tragedy and survival on Saturday evening.

Dale Thrasher was inside Yazoo City's Hillcrest Baptist Church when it was flattened by the tornado.

"I went in the sanctuary and got under the pulpit table and the whole building fell around me," he said.

Rob and Ashley Saxton were driving to a Yazoo City restaurant owned by Rob's father -- planning to take shelter in the restaurant's walk-in freezer ahead of the tornado -- when the twister blew out the car's windows at a red light. The car was tossed across the intersection, then picked up again and flung into the restaurant.

"When the windows exploded it wasn't like anything I've ever experienced," Rob Saxton said. "It was amazing. It scared us plumb to death."

In all, 12 counties were reporting injuries, with some of the injured airlifted to a Level 1 trauma center at the University of Mississippi Medical Center in Jackson, said Jeff Rent, a MEMA spokesman.

The hospital has 27 patients with injuries sustained in the tornado, including eight adults in critical condition and six children in serious condition, according to spokesman Jim Albritton.

Many tornado victims were seeking attention at King's Daughters hospital in Yazoo City, where only one doctor was on duty Saturday night, said Jess Silvino, a nurse there.

The hospital is expecting "another one or two waves of victims" as crews are able to fully access the tornado's path, said Richard Summers, chairman of emergency medicine at the medical center.

The hospital has crews in Yazoo City and Lexington that have been "amazed and astounded" by the amount of damage they're seeing, Summers said.

The state's emergency management officials have set up a command post near U.S. 49 in Yazoo City and the state has activated a 25-person rapid response team from Hattiesburg that is capable of search and rescue operations.

The governor said he is activating local members of the National Guard in Yazoo City to maintain order.

President Obama has "been briefed on the tragedy in Mississippi and the situation is being followed by the White House," Obama spokesman Bill Burton said.

Barbour said that he has not yet requested emergency federal aid but that he plans to do so on Monday.

"FEMA is in contact and coordination with our state and local partners and stand ready to help if a request is made," said Brad Carroll, a spokesman for the Federal Emergency Management Agancy.

Mississippi residents reported that the path of the twister was a half-mile to a mile wide, said Mark McAllister, a forecaster with the National Weather Service in Jackson.

CNN meteorologist Jacqui Jeras said the tornado had traveled 150 miles across Mississippi, starting in the western part of the state and moving northeast before weakening as it moved into Alabama.

In Yazoo City, Fire Chief Roy Wilson said that between 20 to 30 houses were destroyed, and said some people were trapped inside structures. Wilson said he didn't yet have confirmed numbers on injuries.

"It's in pretty bad shape so far," he said of the city.

Speaking to reporters in Yazoo City, Barbour said that 17 injured have been taken to a hospital via ambulance and that two others were airlifted to Jackson.

"By God's grace [the tornado] did not go into the most central part of the city, the most populous. However, it went through the southern edge and eastern edge of town in a number of large neighborhoods," he said. "A number of businesses have been destroyed and others severely damaged -- there are churches that have been obliterated."

The sheriff's department in nearby Hinds County is sending two dozen deputies and 100 inmates to assist with the response in Yazoo County and to clear debris, MEMA said.

Have you been affected by severe weather? Send in pics, video

I went in the sanctuary and got under the pulpit table and the whole building fell around me.
--Dale Thrasher, who took cover inside a church in Yazoo City
RELATED TOPICS

Parts of three highways were closed due to downed trees and other damage: State Highway 3 in Yazoo County and State Highways 14 and 17 in Holmes County, according to the the Mississippi Department of Transportation.

On I-55, traffic was down to a single lane in each direction in parts of Holmes County and in the area north of Pickens, the transportation department said.

Linda Green, a dispatcher with the Issaquena County Sheriff's Department, said there was minimal damage in the area around Valley Park, and a few power lines were down.

Saturday's tornado was part of a broad band of storms that stretched from Missouri to the Florida Panhandle, Jeras said.

The storm system struck Louisiana before it moved into Mississippi. A Tallulah, Louisiana, police dispatcher said a chemical plant in the city had been damaged, but could not give further details.

Turner, the Mississippi governor's spokesman, said emergency response teams had been slowed by people out surveying the effects of the storm.

"One of the biggest obstacles is, of course, people are curious and want to get out and see the damage," he said. "We've urged people to stay away from those areas, not only because it slows down the emergency response, but there are also still live electrical wires, there are open gas lines that will have to be shut down."