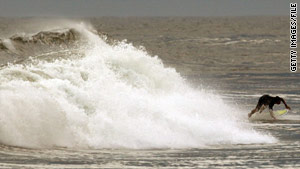 (CNN) -- University forecasters predict the 2010 Atlantic hurricane season will be above average, with 15 named storms and eight of those becoming hurricanes.

The Colorado State University report was released Wednesday, nearly two months before the beginning of the Atlantic hurricane season on June 1.

In the report, forecasters William Gray and Phil Klotzbach said that El Niño conditions will dissipate by summer and that unusually warm tropical Atlantic sea surface temperatures will persist, leading to favorable conditions for hurricanes to develop and intensify.

Of the eight expected hurricanes, the forecasters predict that four will strengthen to major hurricanes, meaning Category 3 or higher on the Saffir-Simpson scale of strength. Category 3 storms have sustained winds of at least 111 mph.

However, the two forecasters emphasize the forecast is preliminary and that revised ones will be released on June 2 and August 4.

"We issue these forecasts to satisfy the curiosity of the general public and to bring attention to the hurricane problem," the report said.

"All five of these seasons had above-average activity, especially the seasons of 1969, 1998 and 2005," a statement from Colorado State University said.

However, Klotzbach and Gray predict the 2010 season will have slightly less activity than the average of these five earlier years.

Last year's hurricane season was below average, with nine named tropical storms, three of which were hurricanes. The National Hurricane Center said it was the lowest number of tropical storms for the Atlantic basin since 1997.

Klotzbach and Gray put out four predictions for each hurricane season, beginning in December before the season begins.

The hurricane season will end November 30, but later storms have been known to happen.