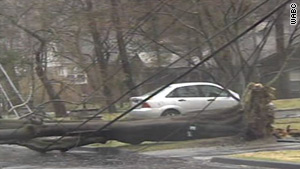 Wind and rain on Saturday wreaked havoc on trees and power lines in the Northeast.
STORY HIGHLIGHTS

(CNN) -- Heavy rains and hurricane-force winds that surpassed 70 miles per hour in places toppled trees, left more than half a million people without power, and suspended travel throughout much of the Northeast and mid-Atlantic region Saturday night.

Four inches of rain fell in parts of the region, and the National Weather Service extended storm and flood warnings for much of the area into Sunday.

"This storm is such a slow mover that it's not going to pull out probably until Monday," said CNN meteorologist Jacqui Jeras. "There's another whole day to get through with heavy rain and strong winds."

Some areas will see an additional 1 to 3 inches of rain by Sunday, Jeras said, though winds are expected to die down to a maximum of 30 miles an hour.

"The ground is so wet from all the snow we've had this winter, it's helping the trees to topple over, as well as our utility poles," said Long Island Power Authority president and CEO Kevin Law. "The conditions are still too terrible to get crews out there."

Law said that some customers will likely go without power until early next week.

Con Edison reported 97,000 customers without power in New York City and Westchester County, while other electric companies in the region reported tens of thousands more were in the dark.

Amtrak suspended trains between New York and Philadelphia because of issues with overhead wires and power outages. About 10 Amtrak trains were affected.

Boston's Logan International Airport diverted flights due to weather and there were reports of major delays at airports throughout the Northeast.

Across the region, trees and utility poles crashed onto houses and cars. Part of a crane collapsed at a construction site in Atlantic City, New Jersey.