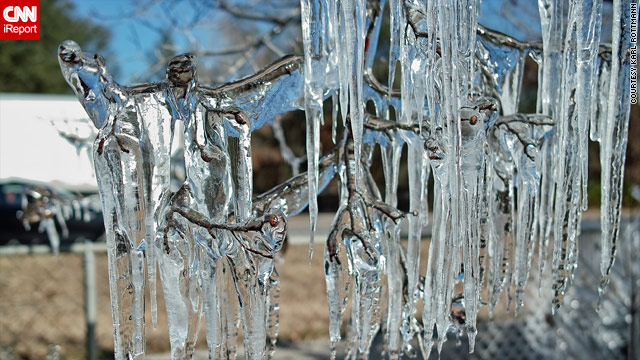 "This is a one-time chance for people to photograph something like this in a hot place like Florida," iReporter Karl Rottmann said of photos taken in St. Augustine, Florida, Sunday.
STORY HIGHLIGHTS

(CNN) -- Frigid temperatures threatened Florida citrus crops as much of the Southeast into plunged into the teens Monday morning.

State capital Tallahassee had plunged to 16 degrees by 5:25 a.m. ET, while temperatures in the 30s or below could be found well south of Orlando.

The cold made Florida cities like Winter Haven anything but.

Normally immune to the cold of winter, temperatures in Miami barely got into the 40s on Sunday; normally, they'd be in the 70s.

But the biggest news about the big chill is coming from the northern part of Florida, where a hard freeze watch is in effect, CNN's meteorologist Bonnie Schneider said. That could be bad news for citrus trees that rarely survive when temperatures remain in the mid-20s or below for four hours or longer, according to Kristen Gunter, a spokeswoman for the association of companies that pick and process the oranges.

Some groves in the northern part of the growing area sustained substantial damage Saturday night and Sunday morning, when temperatures dipped to 28 degrees or lower for at least six hours, said Andrew Meadows, spokesman for Florida Citrus Mutual, a group representing about 8,000 citrus growers in the state. It will take about five weeks to quantify the losses, he said.

Florida citrus is a $9.3 billion industry. The state produces three-quarters of the United States' orange crop and 40 percent of the world's orange juice supply.

"[Sunday night] will be the night to watch, because if things don't go well, the entire economy will be affected, jobs could be lost if fruit on the ground cannot be harvested, workers will go elsewhere in the U.S., and Florida will lose," Gunter said.

The citrus harvest is at its peak right now, she said, and workers are already grinding away seven days a week as it is. "I'm not sure we can work any faster," Gunter said.