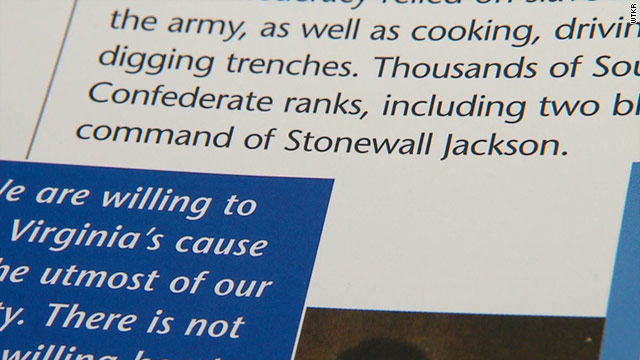 Historians found a number of factual errors in "Our Virginia," a fourth-grade history textbook used in many Virginia schools.
STORY HIGHLIGHTS

(CNN) -- A panel of historians has found an "appalling" number of factual errors in a new fourth-grade history textbook used in many Virginia school districts, one of the experts said.

The panelists vetted the book "Our Virginia: Past and Present" at the state's request, after it drew national scrutiny for its controversial assertion that during the Civil War, units of black soldiers fought on the Confederate side.

Among the mistakes noted by the three reviewers:

• George Washington did not preside over a Continental Congress in 1785, he presided over the Constitutional Convention in 1787.

• Eleven states joined the Confederacy, not 12.

• There wasn't a Battle of Richmond in the Civil War.

The panelists also dismissed as unfounded the assertion that significant numbers of African-Americans fought for the South during the Civil War.

The historical inaccuracies "are appalling in number," said retired professor Ronald Heinemann in his report to the Virginia Department of Education.

Lapses in grammar, punctuation, and spelling were also criticized: like the words "developement," "ammendment," "seccession," "neccesary" and "seperate."

But panelist Lauranett Lee, while proposing a dozen corrections, praised the book for its concise and age-appropriate writing style and said in her report, "Overall, this book was well done."

The publisher of the book, Five Ponds Press, did not respond to inquiries for comment Wednesday.

But in an e-mail to the Washington Post, which first reported the controversy, Five Ponds owner Lou Scolnik wrote, "Most of the items you reference have been identified" and will be addressed in the book's next printing.

Yet school districts that have already bought hundreds or thousands of copies of the book now face the question of what do to with them. For example, Fairfax County, one of the largest districts in the country, bought 10,000 copies at a cost that may approach half a million dollars. And the publisher is not necessarily obliged to provide corrected copies for free, said Kurt Waters of the district's social studies department.

He said his district has not ruled out the possibility of still using the book -- with a supplemental guide for teachers on how to handle corrections -- nor has neighboring Loudon County, according to spokesman Wayde Byard.

A copy of "Our Virginia" perused by CNN revealed a lively and colorful textbook, and the panelists described it as well-paced and engaging. The book is also about $17 cheaper than its competitors, said Ken Bassett of the Prince William County School District. That district had listed the book in its annual review as one it was interested in buying. Bassett said they still might be interested in purchasing the second edition if the concerns about the book are addressed.

In the meantime, the Virginia Department of Education is reviewing its process for approving textbooks for use statewide.

"The textbook was originally reviewed by three grade-school teachers," not by trained academics, department spokesman Charles Pyle said. The teachers were mostly checking to see whether it covered the topics mandated by the state and whether kids would find it interesting, he said.